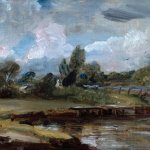 Flatford lock from the mill pond end, a rapid sketch showing the cross beams of the lock from the side of the river and the white water escaping from the lock. 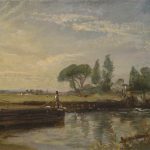 A barge near the lock, a view from the mill pond end. 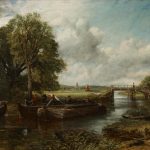 Two barges on the Stour, a group of ash and oak trees with a white horse on the far bank, the barge left with dropped brown sail reflected in the water and a man leaning on the far side smoking a pipe. In the foreground a landing stage, beyond the gable of a cottage and a flat wooded landscape towards Dedham Church. 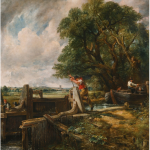 Boat waits to enter the lock to move upstream with threatening rainclouds overhead and distant views across the water meadows towards Dedham Church.

The Lock is the fifth of six paintings that make up the Stour series of ‘Landscapes’ that became known as the ‘six-footers’ and which included ‘The White Horse’ 1819, ‘The Haywain’ 1821, ‘A view on the Stour near Dedham’ 1822, ‘Leaping Horse’ 1825, and the sixth being further up stream at Stratford (Stratford Mill 1820) 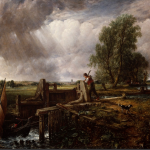 Boat ascending the River Stour, tied to a post while the lock keeper lowers the level so it can enter the chamber.

The Lock is that of Flatford, looking westwards towards Dedham Church visible in the distance, with the background to the far right Flatford Bridge. 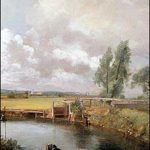 The lock gates of Flatford from the Mill house. 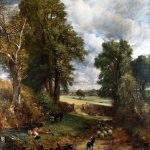 A boy paused from thirsty work of herding sheep, lies flat on the bank of cool water next to the cornfield.

The winding lane, that of Fen Lane and which Constable knew well from his childhood that took him to school past the church, along Flatford Lane, passing this spot down Fen Lane, over Fen Bridge and across the meadows to the Grammar School. 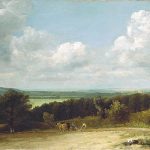 65. Summerland (A ploughing scene in Suffolk)
Oil on Canvas, 50.5cm x 76.5cm, Private collection
The scene from behind Old Hall Park, home of the Godfrey’s, over the Stour valley on the left towards Stratford St Mary Church towards the right of the painting.
Map List 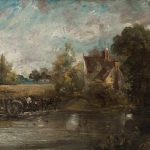 Described as an alternative view to ‘The Haywain’, this compositional sketch became the subject of the BBC 2017 Fake or Fortune programme. Provenance as a genuine John Constable was finally established, but only after it had been on the market twice since 1995, then described as being painted by someone within the ‘circle of Constable’. 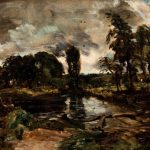 This study is for a painting of the Mill from the lock exhibited at the Royal Academy in 1812, otherwise known as ‘A watermill’ and now held in a private collection. 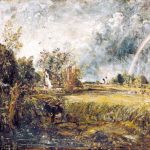 Green landscape of cottage and windmill with workhorse to the foreground.

This simple green landscape seems to be in disarray with the untidy fields and a poor workhorse stuck out in the cold waiting for the storm to come. 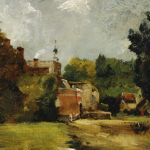 This oil study looking at the church from the direction of the village green, barely 100 yards from his birthplace, East Bergholt House. 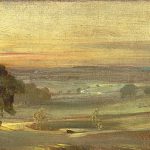 Valley of the Stour at sunset, 31 October 1812. This oil sketch, and its partner Autumnal sunset, are two of a small group of sunsets Constable painted in 1812. 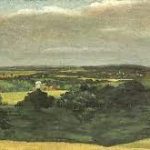 A view over the Stour Valley to Brantham, showing the weatherboard mill owned by Golding Constable. 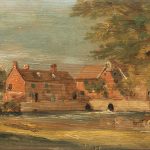 Constable's compositions were clearly dictated by what he saw in front of him, using symmetrical compositions and scenes that focused on manmade buildings such as this, his father Golding Constable's Mill at Flatford. 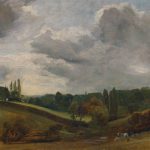 This painting was originally known as ‘Highgate’ but is actually another view of East Bergholt Rectory, home of Dr Rhudde, grandfather of Constable's beloved Maria Bicknell. 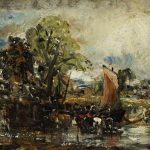 Barge being drawn by horses out of a dry dock. 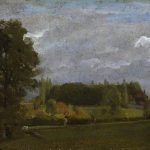 A view of East Bergholt, the village in which Constable grew up. 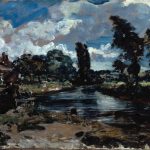 Flatford Mill was owned at the time by Golding Constable, John's father, a wealthy corn merchant. 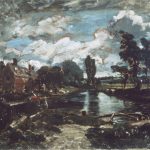 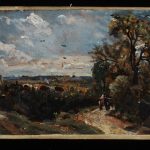 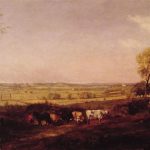 The view is from the junction of Fen Lane, looking west along the Stour Valley, the track Constable had taken each day to the Grammar School in Dedham. 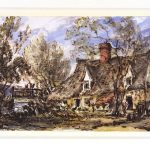 Bridge Cottage with Flatford Bridge behind to the left. 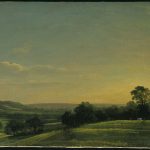 This view up the Stour valley towards Stoke-by-Nayland with Langham just out of sight on the left, believed to have been painted behind West Lodge, home at the time to dear friend and elderly neighbour Mrs Sarah Roberts. 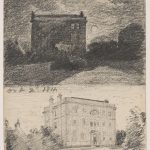 Two pencil sketches of East Bergholt House, the Constable family home, inscribed by the artist ‘below the house by moonlight’ 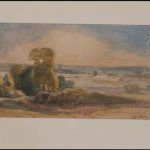 This view of Dedham Vale drawn from the top of Fen Lane, the track Constable had taken each day to the Grammar School in Dedham. 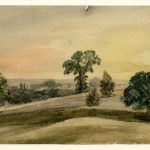 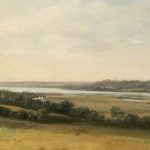 Although the painting location for this piece is not exactly known, the view looks out across the valley to the south bank of the Stour towards Manningtree and Mistley.

The red bridge is that of Catawade and the bridge to the right was demolished in 1911.
It has been suggested that the ship in the picture may have been the ‘Telegraph’, owned by Constable's father and moored at Mistley. 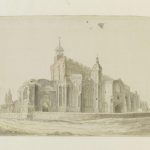 Pen and watercolour sketch of East Bergholt church with yellow, blue and red wash, squared for enlargement with pencil, one of Constable's earliest sketches in the village. 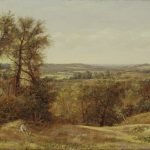 A view from Flatford Lane over the valley to Dedham, with Dedham Church clearly to the centre.