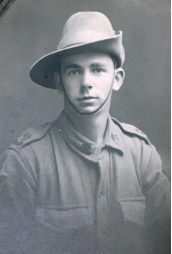 Max Clifton was born in East Bergholt on 4th June 1894, the fourth son of Maximillian and Susannah Clifton, thought to have lived near or in “Rectory Hill”.  Because we are unsure of the exact house, we have locate s him on the map at his school, Burnt Oak, which we know he attended. After emigrating to Australia Max joined the AIF, ànd survived the Gallipoli campaign in 1915. Sadly he was killed in the last year of the war in 1918, helping halt the German advance on Amiens in France

Max Clifton was born in East Bergholt on 4th June 1894, the fourth son of Maximillian and Susannah Clifton. Maximillian - or Charles as he was also known – was originally from Wisbech, which at that time was in Norfolk. Charles appears to have spent some time as a Coachman in London, but later took up farming.

His first wife died, and in 1888 he married Susannah Hill, from Holton St. Mary; Charles was 48 at the time, and Susannah was 25. Charles and Susannah made their home in East Bergholt, where he was a Dairy Farmer (sometimes also referred to as Dairyman, or Milkman). It is not clear whether the Cliftons lived in just one residence in the village, as their address was variously described at the time as “near the Church”, “Church Walk”, “Rectory Hill”, “The Dairy” and “Brook Dairy”. Charles and Susannah would have at least 9 children together, including 6 boys and 3 girls.

Young Max started at the village school at Burnt Oak corner on 18th April 1898, and remained as a pupil there until March 1908. After leaving school he found employment in farming, possibly working for his father on the dairy farm. On 28 December 1911, Max sailed from London on the SS Geelong, bound for Australia. He arrived in Sydney on 14th February 1912. Exactly what work Max did when he initially went to Australia is not clear, but certainly by March 1915 he was employed as a Groom. As a Dominion of the British Empire, Australia automatically went to war with Germany with the British Declaration on 4th August 1914. It is perhaps forgotten today that many of those from the dominions – quite probably the majority - considered themselves British, either because they were born in the United Kingdom or had close family links there. The outbreak of the Great War was greeted in Australia with tremendous enthusiasm, and both the Prime Minister and the Leader of the Opposition pledged their full support for the Mother Country. Shortly afterwards, they formed the Australian Imperial Force (A.I.F.), which was to be the main expeditionary force of the Australian Army. By the end of the Great War. The A.I.F. had earned a reputation as a formidable fighting force, often being used as shock troops. However, it came at a cost: From a population of less than 5 million, 416,809 men enlisted, and of those more than 60,000 were killed and 156,000 wounded, gassed, or taken prisoner. Six months after the outbreak of war, Max married Margaret Ann Gardner in New South Wales. Margaret, who was originally from Overton in Lancashire, had arrived in Australian two years before. The couple were not to enjoy married life for long, for on 22nd March 1915, Max volunteered to join the Australian Imperial Force. His Service Papers record that he was 5 foot, 7 ½ inches tall, weighed 145 lbs, with a dark complexion, “good grey” eyes and brown hair. Max was posted to the 20th Battalion of the AIF, and sailed with them from Sydney on 25th June 1915, bound for Egypt. However this was just a temporary halt for several weeks, whilst they underwent further training. On 22nd August 1915, the Battalion landed at Anzac Cove on the Gallipoli peninsula. The Allies had first landed in Gallipoli four months earlier, but by the time that the 20th arrived the campaign had ground to stalemate, despite recent attempts by both the Australians and British to break it. The 20th withdrew from Gallipoli in December 1915, as part of the Allied evacuation of the peninsula. After a short period in Egypt where they were brought back up to strength, and were transferred to France in March 1916. In late July 1916, the 20th Battalion were committed to the large Anglo-French Offensive which had started on the 1st of that month, now better known as the Battle of the Somme. In the fighting which took place near the village of Pozieres, Max was wounded in the left hand and right foot. Just over a week later he was evacuated to England, and was admitted to the 2nd Birmingham War Hospital, in Northfield. During his time in France and Belgium Max was promoted to the rank of Sergeant. In addition to the usual tours of duty in the trenches, he was also involved in the fighting around Bullecourt during the Battle of Arras in May 1917.

That same month, his elder brother Fred was killed in action just a few miles away, whilst serving with the Royal Fusiliers.1 In June, Max’s father passed away at the age of 79. At the start of September 1917, Max was detached to the 5th Training Battalion in England. It is not known whether he travelled from their camp in Wiltshire to visit his mother in East Bergholt. Max’s posting to the 5th Training Battalion meant that he missed the 20th Battalion’s involvement in the Third Battle of Ypres (commonly called the Battle of Passchendaele). On 21st March 1918, the Germans launched the first in a series of massive offensives, primarily directed against the British Expeditionary Force, and designed to knock Britain out of the War. Over the next two weeks, the Germans made tremendous advances which at times looked like they might achieve their aim. Max and the 20th Battalion were one of those units rushed into the line to try and stop the German advance towards the important strategic centre of Amiens. By 5th April, this particular German offensive had effectively been halted, just 10 miles to the east of Amiens. Two days later, elements of the 19th and 20th battalions of the A.I.F. were tasked with clearing the Germans out of part of Hangard Wood, just south of the village of Villers Brettoneux. Max was in the company commanded by Captain Portman, which would attack the southern part of the Wood. The Australians reached the general area of their objectives, but then the Germans started to counterattack and trying to enter the southern edge of the Wood. The Australian Official History recounts what happened:

“Recognising the danger on his right, Portman sent Sergeant Clifton with half-a-dozen men to hold a shooting box on his right front, which seemed to offer the only cover there. About the same time there came up an officer of the 19th, who said that he was retiring, having no support on his left. That flank, however, was not yet threatened. Portman therefore moved back some of his men on the right and set them to dig in facing southwards. Their entrenching tools – the only implements they had – made little impression in the chalk, and they were not under cover when, at 7 o’clock, the Germans were seen assembling in the depression ahead. The Lewis gunners fired into these and they fell in heaps. Twice this happened, and the frontal attack was thus shattered. But the Germans were now again active on the right. A machine-gun opened from close behind the flank, cutting the Australians down. Corporal Paul, having detected its position, was sent with two men to work behind it and destroy it with rifle-grenades. Presently its fire ceased, but machine-guns from the direction of Hangard now swept the crest. The Germans on the right surrounded the shooting box and began to filter behind the main position. The 19th having gone success was hopeless; Portman ordered his men to retire to the old front line. The party in the shooting box could for some time afterwards be heard fighting.”2

In the course of the fighting Max was shot in the lungs, and captured by the Germans. He was taken to one of their hospitals in the town of Peronne, where Max died at 4 o’clock in the afternoon of 9th April. He was 23 years old. Max was buried by the Germans in the Peronne Communal Cemetery Extension. In 1924, Max’s body was exhumed and re-interred in Tincourt New British Cemetery, where he rests to this day.3 Margaret Clifton remarried in 1920. She went on to have 4 children, before dying at the age of 69 in 1955. Susannah Clifton died on 3rd May 1945, aged 83. She was buried with Charles in East Bergholt Cemetery. Their gravestone also commemorates their two sons who died in the Great War, Max and Fred. 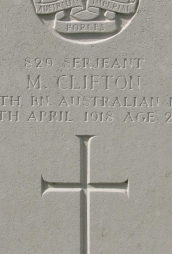 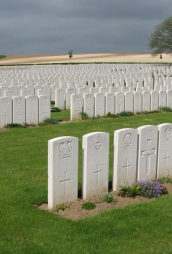 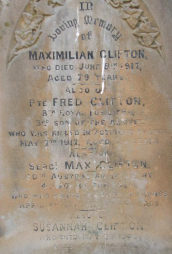