You are here: Home > Boys Fishing 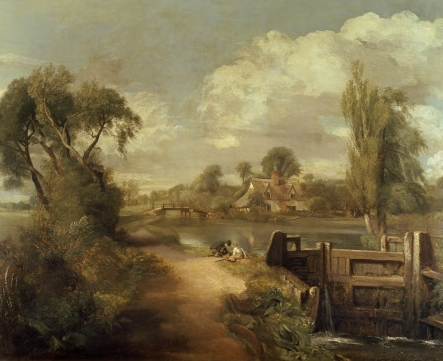 Constable exhibited ‘Boys Fishing’ this year for his ‘Landscape’ exhibition at the Royal Academy and which we presume is the same work shown again the following January at the British Institution Exhibition titled ‘A lock on the Stour’ which included two boys fishing.

Following the 1814 exhibition of this piece, Constable received correspondence from his uncle David Pike Watts who sent him his criticisms: ‘I really had a great struggle between inclination and interest, between the desire to oblige you in the purchase of your picture and the revolt which will check such a desire when the eye perceives unfinished traits.  Will any person voluntarily prefer an imperfect object when he can have a more perfect one?’  Constable replied the same day ‘Your kind solicitude respecting my picture of the Lock is highly gratifying to me – but it may now cease, as the picture has become the property of Mr Carpenter, who purchased it this morning.  He is a stranger, and bought it because he liked it’

Farington* also gave his account in his diary April 13.’Constable called to inform me that at the close of the British Institution Exhibition to make room for the works of Wilson, - Hogarth, & Gainsborough, He not having sold His picture of the Lock Scene (Landscape) was applied to by Carpenter, the Bookseller in Bond Street who said he could not afford to pay the money, he was willing to do, but he would give him 20 guineas in money, and books to a certain amount beyond that sum.  Constable accepted the offer, & I told him I thought he did well’

In later years Constable had many dealings with James Carpenter and his son William.  It was also James that goes on to buy ‘Landscape and Lock’, a different view of the subject later this year.

The painting can be viewed at Anglesey Abbey Museum