You are here: Home > Celebration of the General 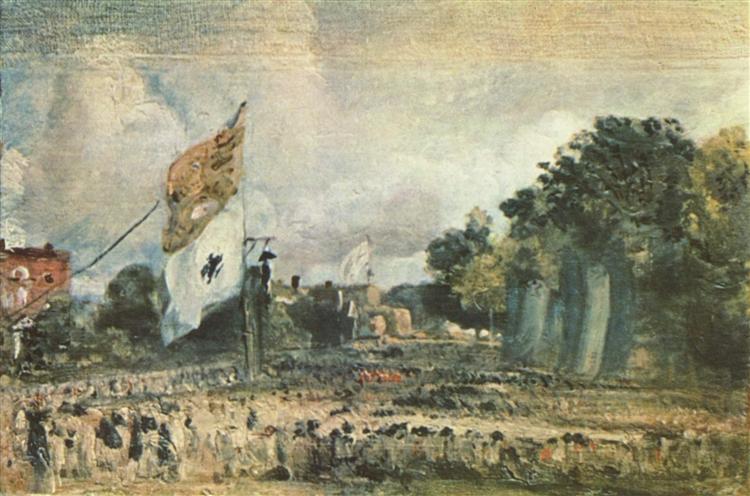 5 celebration of the General

Initially believed to be a celebration of the victory of Waterloo, more recent study suggests the painting is more likely to be a procession held for the poor people of East Bergholt, celebrating the peace treaty 9 July 1814.

The view which is from Beaufont Cottage, over the village green to the Church, with East Bergholt house on the left.  The green packed with local people who receive the victorious soldiers to the town square and hung a uniformed effigy of Napoleon to symbolise the defeated enemy.

Its style of rapid movements and scratched off layers of quickly applied paint perhaps shows you the throught process in Constables mind and how his ideas are generated.

This year saw Constable exhibit ‘Landscape’ ‘A lock on the Stour’, ‘Ploughing Scenes in Suffolk’ (better known as ‘Summertime’) and ‘Ploughman’ at both the BI and the Liverpool Academy, but unable to see Maria, Constable’s letters become melancholy and writes in the February ‘I am alienated from my own family and society and all intercourse with.....the only woman I ever loved in the world’

Budapest museum of fine Art, Hungary (not currently on display)