You are here: Home > Clouds 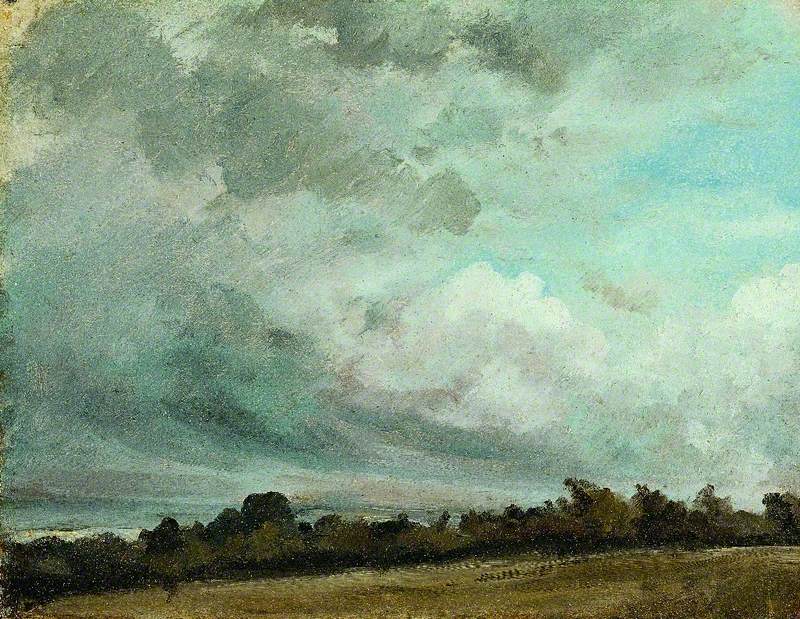 {"type":"FeatureCollection","features":[{"type":"Feature","properties":{"post_type":"constable-painting","postid":1621,"title":"Clouds","excerpt":"Cloud study, waiting for the storm behind East Bergholt House.Always fascinated by cloud formations and the weather, by the early 1820\u2019s Constable began a series of \u2018Cloud Studies' in both watercolour and oil, in which he included a margin of land or treetops along the bottom of an image, such as this study from the Donkey Track on the old Heath behind Constable's family home.","highlight":"yes","index":119},"geometry":{"type":"Point","coordinates":[1.02501,51.97191]}}]}

Cloud study, waiting for the storm behind East Bergholt House.

Always fascinated by cloud formations and the weather, by the early 1820’s Constable began a series of ‘Cloud Studies' in both watercolour and oil, in which he included a margin of land or treetops along the bottom of an image, such as this study from the Donkey Track on the old Heath behind Constable's family home.

One of the earliest studies of clouds, the artist has used sweeping brushstrokes to express the movement of the clouds in the wind,  and was known for painting many of these studies in an hour or so, demonstrating that not only was he interested in weather conditions, but also the weather before and after the time in which he sketched and allowing him to study the shifting effects of light and shade on the landscape.

Constable spent 2 years on Cloud study around this period and on 23 October 1821 he wrote to John Fisher:

‘I have done a good deal of skying– I am determined to conquer all difficulties and that most arduous one among the rest, & now talking of skies – …That Landscape painter who does not make his skies a very material part of his composition – neglects to avail himself of one of his greatest aids. Sir Joshua Reynolds, speaking of the ‘Landscape’ of Titian & Salvator & Claude– says ‘Even their skies seem to sympathise with the Subject’ …It will be difficult to name a class of Landscape, in which the sky is not the  'key note’ – the standard of  'Scale’, and the chief ‘Organ of sentiment’… The sky is the ‘source of light’ in nature – and governs every thing. Even our common observations on the weather of every day, are suggested by them but it does not occur to us’ (Beckett VI, pp. 76–77).