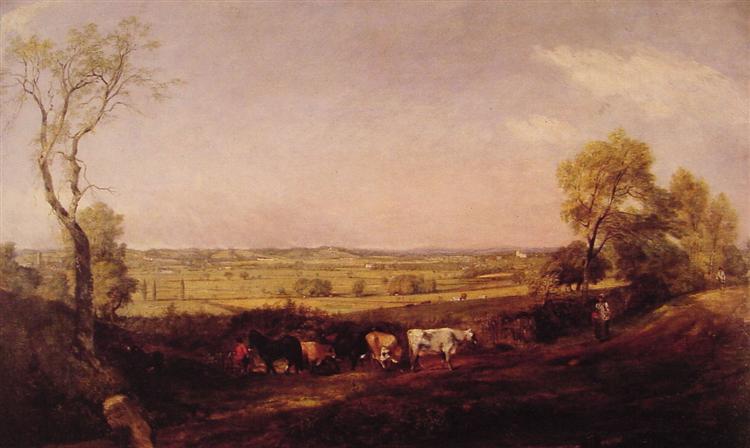 The view is from the junction of Fen Lane, looking west along the Stour Valley, the track Constable had taken each day to the Grammar School in Dedham.

The track leads down the lane and over Fen Bridge and along the Stour valley, a route now so familiar to us all in his paintings and which Constable would paint from the same spot over many years, including  ‘Vale of Dedham’ and ‘Cornfields’ in which the donkey reappears, and in the study associated with it.

It is believed this was Constable's first large scale exhibition picture, its composition is in the style ‘Claude Lorrain’, a 17th century French painter,   whose work Constable was devoted to throughout his life. In June 1836, just a year before Constable's death, at a lecture he presented to the Royal Institution, he described Lorrain as ‘The most perfect landscape painter the world ever saw’.

Signed John Constable pinxt.1811 and exhibited the same year, the exhibition record for this year was rather meagre.   It was not until 1814 and the sale of two landscapes that encouraged him to continue in the profession that he loved.  Practice in portraiture also gave him a fullness of technical ability which he had not previously possessed, so 1811 might be said to mark the end of one phase of his work,  1815 when he went on to exhibit ‘Boat Building’ and ‘Dedham Vale’ would mark the beginning of another.