You are here: Home > Dedham Vale with Brantham Mill 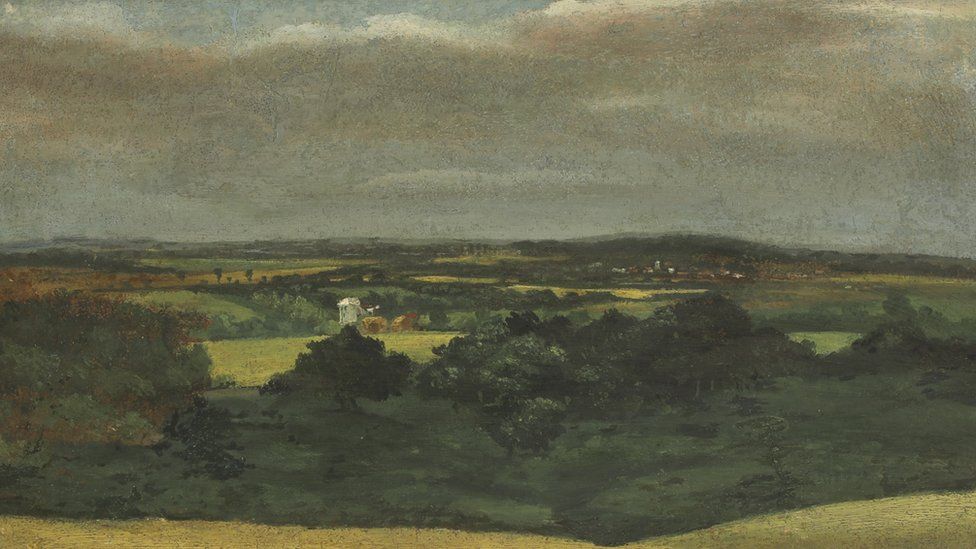 Dedham Vale with Brantham Mill (around 1809-10), which measures at 26.5cm x 43.5cm, was initially dismissed as a fake by a "leading London auction house", according to a statement released by Sworder's. But after the work was inspected by the Constable expert Anne Lyles, it was deemed genuine.

The newly discovered painting shows a view of Dedham Vale and includes a windmill owned by his father.

The most famous work by Constable of the panorama is the picture titled Dedham Vale, Morning which he exhibited at the Royal Academy in 1811 but Constable made a number of preparatory oil sketches for this composition. This is considered to be one; it shows the distant towers of various churches in the distance.

The viewpoint is thought to be the furthest east Constable ever painted Dedham Vale, and includes windmill at the village of Brantham in the picture.

The work, painted in 1809-10, had hung in a London townhouse for many years. A London auction house had previously dismissed it as a copy without investigation but after work by auctioneers Sworders its true identity was discovered.

Pictures specialist Sarah Flynn deemed it worthy of further research and took it to Anne Lyles, the world-renowned authority on the art of John Constable. She later declared it “an exciting new discovery”.  It will go under the hammer at an auction next month with a guide price of £100,000 to £150,000. Sarah said: “It is the dream of every auctioneer to discover a picture by one of the greats of western art. “Dedham Vale is intimately associated with Constable’s life but the inclusion of one of his father’s mills in this picture makes it a particularly personal image.”

Lyles cites "strong tonal contrasts and a fairly even application of paint" as well as Constable's "personal shorthand" of using white flecks of paint to denote buildings in the distance as markers of the painting's authenticity.

Sworder's also points to the work's provenance as proof of its legitimacy. Records show that it was handled by the Legatt Brothers, local dealers who had a close link with the Constable family and sold a large quantity of sketches in oil, watercolour and pencil in the late-19th and early-20th centuries, which suggests that the work came from either Constable or a relative.

Constable’s father Golding Constable is thought to have owned it. The picture once passed through the hands of Leggatt Brothers and points towards a direct link to a member of the Constable family. The dealers had a close link with the Constable family and handled a large number of sketches in oil, watercolour and pencil in the late 19th and early 20th centuries. Constable split his time between London and his home in East Bergholt, where he painted stunning landscapes leading to the area to become popularly known as Constable Country.