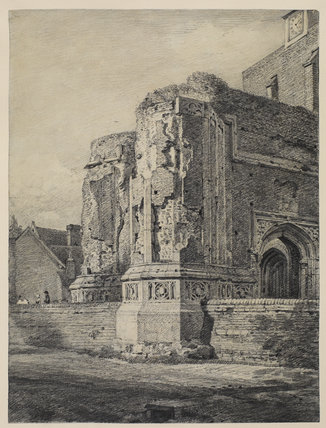 {"type":"FeatureCollection","features":[{"type":"Feature","properties":{"post_type":"constable-painting","postid":1595,"title":"East Bergholt Church","excerpt":"This pencil sketch of the west end of East Bergholt Church, the uncompleted and part ruined west end tower, is believed to have been shown at the Royal Academy in 1818, where it was \u00a0hung in the Antique Academy, the gallery reserved for miniatures, watercolours and drawings.","highlight":"yes","index":93},"geometry":{"type":"Point","coordinates":[1.01227,51.96989]}}]}

This pencil sketch of the west end of East Bergholt Church, the uncompleted and part ruined west end tower, is believed to have been shown at the Royal Academy in 1818, where it was  hung in the Antique Academy, the gallery reserved for miniatures, watercolours and drawings.

1817 proves to be the last long summer Constable spent in East Bergholt after seeking ‘Farington's advice about a vacant house in Charlotte Street and taking a seven year lease on the property.

*Joseph Farington, artist who documented his diary into sixteen volumes between 1793 and his death in 1821 which gave in insight into daily life in the London art community and became an invaluable source for this period primarily due to the meticulous recording of events, dinners, weather, and meetings at the Royal Academy