East Bergholt church, the exterior from the South West

You are here: Home > East Bergholt church, the exterior from the South West 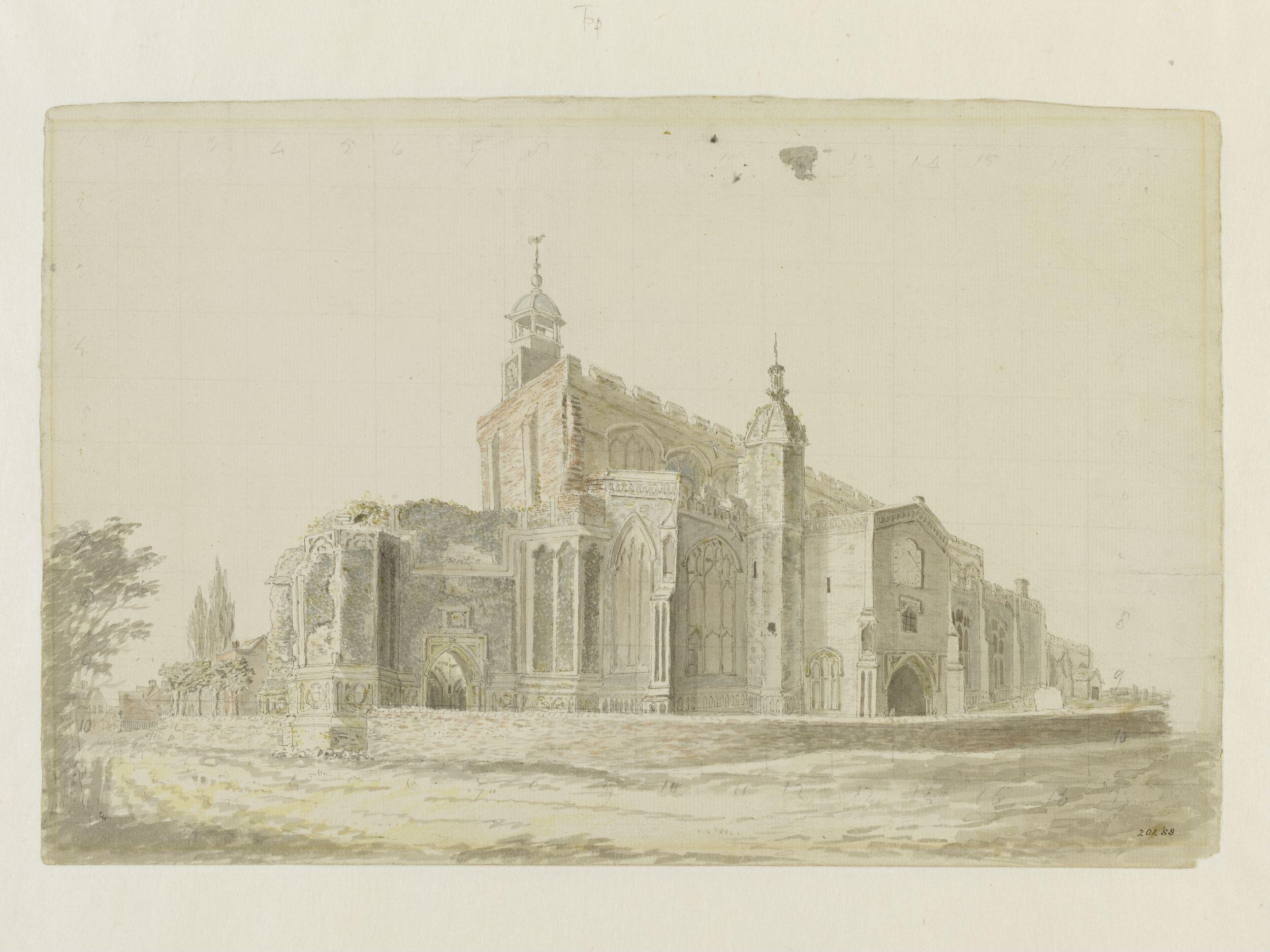 {"type":"FeatureCollection","features":[{"type":"Feature","properties":{"post_type":"constable-painting","postid":1589,"title":"East Bergholt church, the exterior from the South West","excerpt":"Pen and watercolour sketch of East Bergholt church with yellow, blue and red wash, squared for enlargement with pencil, one of Constable's earliest sketches in the village.","highlight":"yes","index":87},"geometry":{"type":"Point","coordinates":[1.01246,51.96969]}}]}

East Bergholt church, the exterior from the South West

Pen and watercolour sketch of East Bergholt church with yellow, blue and red wash, squared for enlargement with pencil, one of Constable's earliest sketches in the village.

Constable had already declared his fondness for painting by the age of 16 or 17, and was encouraged by his good friend and neighbour John Dunthorne**

Constable's letters at the time suggest that the drawing was done during the winter of 1796-1797 as he writes ‘I shall soon send you our church’ and ‘I was thinking of painting it in oil, would it suit you as well to etch from?’ and in the February of 1797 ‘I have begun the Church which I promised you and find it rather a troublesome and tedious job. I have had the misfortune to cut my thumb a little, sufficient to hinder me from holding my pencil with pleasure’

The two poplar trees seen to the the left in this drawing are in the village street, close to Constable's home.  They feature in many of the artist's paintings and drawings around his home, East Bergholt House.

Donated to the V&A by Isabel Constable, daughter of the artist in 1888*

Isabel Constable was the last surviving daughter of the painter and gave the contents of her father’s studio to the Victoria & Albert Museum, making them the principal collector of Constable's work which included 395 oil paintings, sketches, drawings, watercolours and sketchbooks.

** John Dunthorne (Senior 1770-1844) grew up in the cottage next door to Golding Constable’s East Bergholt House (Constable's family home).  As young boys he and Constable formed a friendship and often sketched together.

Six years older than John Constable, Dunthorne, was also an artist as well as glazier, local plumber and village constable albeit he was also a bit of a scallywag.  Constable's mother did not approve of her son's friendship with Dunthorne, and in the years to come nor did Rev Dr Rhudde, Rector of East Bergholt, and his grand-daughter Maria Bicknell who John went on to marry.   Both Constable's mother and Maria considered Dunthorne too low in social class to be worthy of John's time and company.

Over the years Constable included Dunthorne amongst ‘those whose love and friendship I most value’.

Dunthorne married and went on to have 4 children of whom a son, John Dunthorne Junior, also has a significant connection to Constable.

Johnny Dunthorne Junior (1798-1832) was also a keen painter and as a young man of 21 drew the outline of a harvest wagon (Haywain) on a cold February morning and sent the sketches to John Constable who at this time was living in London.

Due to his artistic ability he went on to become Constable's apprentice and joined Constable in his London studio in 1824. Being a serious painter and engraver, picture clearer and restorer, he was also responsible for the preliminary stages of Constable's studio paintings and occasional ‘replicas’

Dunthorne Cottage, home of John Dunthorne Senior currently serves as the Bakery in the village.