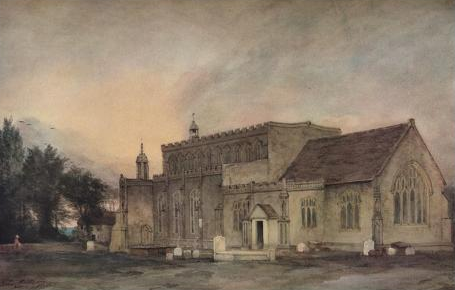 East Bergholt Church, from the south side and clearly showing a doorway and porch to almost the centre of the sketch that no longer exists.

This was an eventful year for Constable, with his mother asking him to paint a watercolour of Bergholt Church as the attachment between Constable and Maria was at a critical stage.  Mrs Constable decided that it would be a diplomatic gesture as a presentation to Dr Rhudde, grandfather of Maria Bicknell and Rector of the parish.

With an inscription on the back, the copy was ready for presentation on the 25th February and Mrs Constable reported its very favourable reception in a letter to her son on 6th March in which she described the ‘small tablet’ which Dunthorne* had ‘neatly lettered’ for the back.  Dr Rhudde himself wrote to thank the artist on 16th March enclosing a bank note for him to buy ‘some little article by which you may be reminded of me, when I am no more’

The following year however saw the beginning of Dr Rhudde’s serious opposition to Constable's alliance with Maria which continued to their marriage in 1816.

*John Dunthorne senior, a talented artist himself and neighbour to Constable in their youth became lifelong friends.

Six years older than Constable, he lived in the cottage next to East Bergholt House (which now serves as The Bakery), and would often assist Constable with sketching and lettering.

In later years, it was Dunthorn's son, John (Johnny) Dunthorne Junior who joined Constable as an apprentice in his studio in London, and it Johnny Dunthorne who drew the outline of the harvest wagon (Haywain) on a bitterly cold February morning.