Summerland (A ploughing scene in Suffolk)

You are here: Home > Summerland (A ploughing scene in Suffolk) 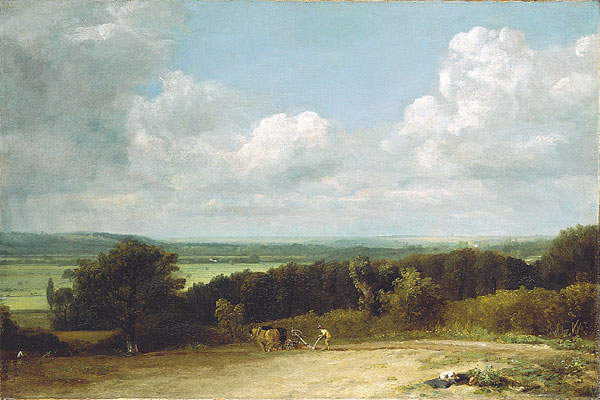 Summerland (A ploughing scene in Suffolk)

The scene from behind Old Hall Park, home of the Godfrey’s, over the Stour valley on the left towards Stratford St Mary Church towards the right of the painting.

Constable exhibited this year at the Royal Academy both in London and Liverpool under its original title   ‘Landscape: Ploughing scene in Suffolk’, and at the British Institute the following year and from where it was purchased by John Allnutt*, a Clapham wine merchant and collector, who encouraged Constable to continue to pursue his career as a painter. Allutt found he didn’t like the sky on the original version and had it reapainted by another artist, later asking Constable to restore it back to its former appearance.

Constable knew this scene well, a few from behind Old Hall Park.  Interestingly Constable originally painted an empty landscape, however thinking it too bleak he touched up the colour with a warmer shade and added the ploughman at work, harrowed in the spring,  a scene of ordinary daily life that was unfashionable at the time.

*John Allnutt (1773-1863) a British wine merchant and art collector, patron of John Constable, JMW Turner and Thomas Lawrence and is believed to have bought the first picture that Constable ‘ever sold to a stranger’