The White Horse (A study of)

You are here: Home > The White Horse (A study of) 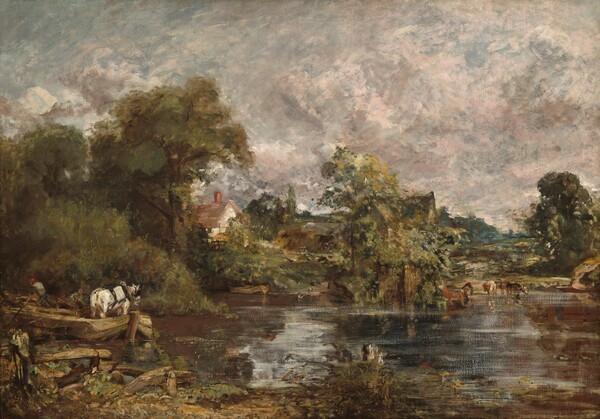 The White Horse (A study of)

South bank of the River Stour with a barge carrying a horse from the towpath to the opposite bank.

This ‘White Horse’ Study is a full size oil sketch of one of his ‘Landscapes' exhibitions, known as the ‘six-footers’ because of their size, and of which the final version is now part of the Frick Collection in New York.

In preparation for these ‘six-footers’ Constable made a full size sketch such as this in oil, not for sale or exhibition, but to help him to work on composition and ideas before tackling the final canvasses.

The final version of this piece was exhibited in 1825, It is thought that Constable may have been planning this large scale landscape from as early as mid 1815 and originally intended to exhibit it at the Royal Academy the following summer. However he overpainted this landscape with the White Horse around this time in preparation for the 1819 academy picture.