View on the Stour near Dedham (BIG SIX)

You are here: Home > View on the Stour near Dedham (BIG SIX) 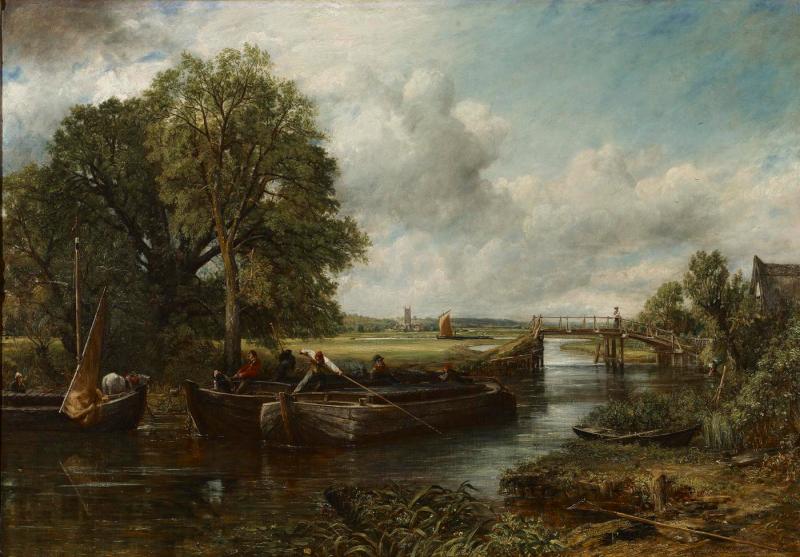 60 View on the Stour near Dedham

{"type":"FeatureCollection","features":[{"type":"Feature","properties":{"post_type":"constable-painting","postid":1268,"title":"View on the Stour near Dedham (BIG SIX)","excerpt":"Two barges on the Stour, a group of ash and oak trees with a white horse on the far bank, the barge left with dropped brown sail reflected in the water and a man leaning on the far side smoking a pipe. In the foreground a landing stage, beyond the gable of a cottage and a flat wooded landscape towards Dedham Church.","highlight":"yes","index":60},"geometry":{"type":"Point","coordinates":[1.02035,51.95954]}}]}

View on the Stour near Dedham (BIG SIX)

Two barges on the Stour, a group of ash and oak trees with a white horse on the far bank, the barge left with dropped brown sail reflected in the water and a man leaning on the far side smoking a pipe. In the foreground a landing stage, beyond the gable of a cottage and a flat wooded landscape towards Dedham Church.

Believed to have been started in the Autumn of 1821, Constable chose a view from beside the boat building yard at his father’s mill at Flatford, looking towards Flatford Bridge, with Dedham church in the distance. There are three drawings of this specific view in his 1814 sketchbook and which no doubt are the basis of this composition.

Signed John Constable pinx Londo, 1822 this is the full size sketch of ‘View on the Stour near Dedham’, having completed a smaller version earlier in the year in preparation, and became known as one of six great river pictures produced by Constable.  These ‘Landscape’ ‘six-footers’ included ‘The White Horse’ 1819, ‘The Haywain’ 1821, ‘The Lock’ 1824, ‘Leaping Horse’ 1825, and the sixth being further up stream at Stratford (Stratford Mill 1820)

Having exhibited at the Royal Acadamy this year and again at the British Institute in 1823 where the painting was purchased by Paris art dealer Arrowsmith, who exhibited it at the Paris Salon later that year alongside ‘The Haywain’.

The early twenties are some of the least well documented years in Constable's working life. The artist did, however, receive a number of commissions this year, submitted this piece to the Royal Academy in the April, moved his family into Charlotte Street in London where he has a large new ‘Painting Room’, welcomes his fourth child Isabel in the August, produced numerous oil studies in Hampstead, and has to postpone his planned visit with John Fisher in Salisbury owing to the ‘pressure of work’.