You are here: Home > Bridge Cottage 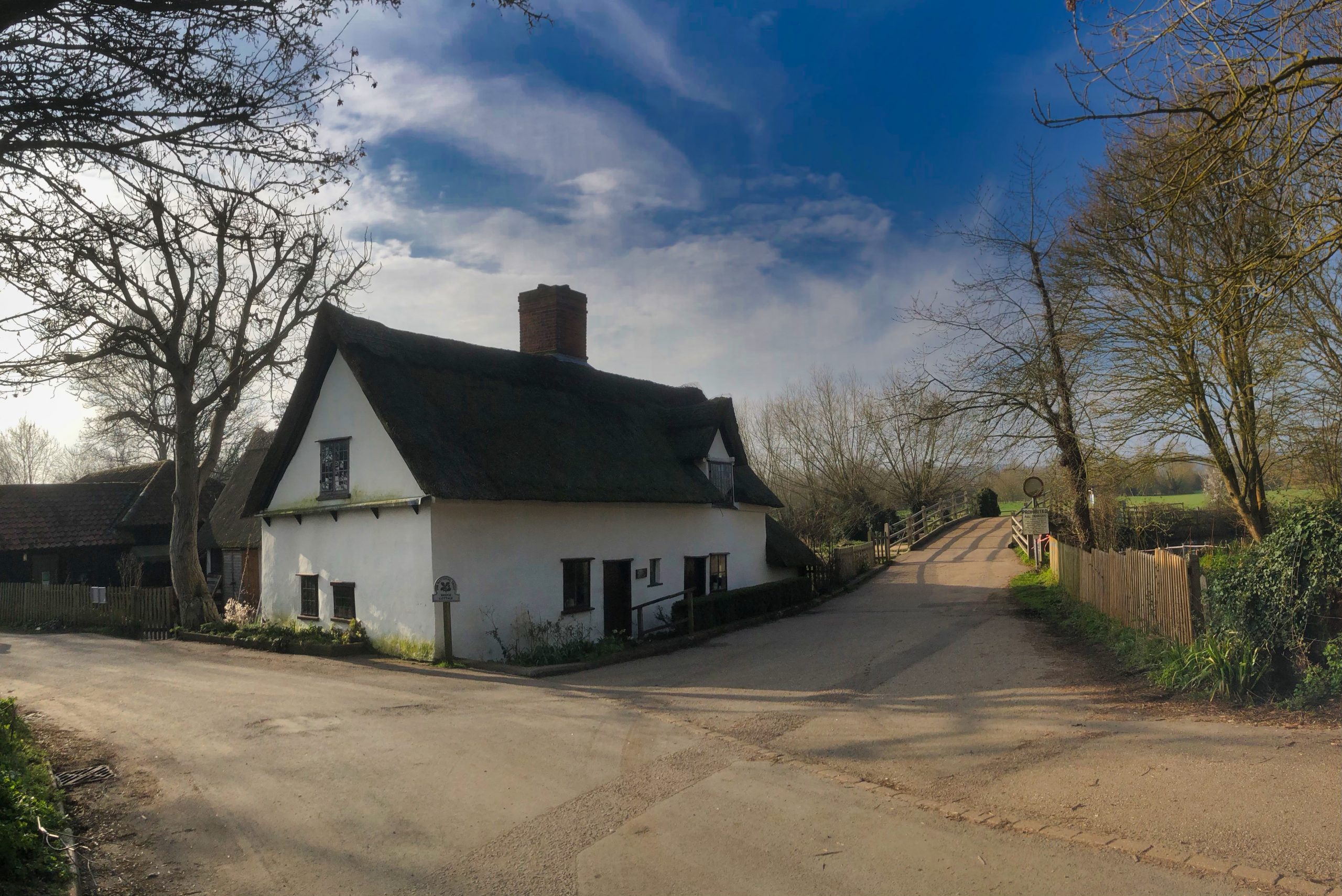 Bridge Cottage is timber framed with later additions. Its Grade II* status reflects the historic interest of the building and its extra significance as part of the Flatford Mill group.

There has been a residential dwelling on this site since the 16th Century but buildings of some sort would have existed in previous centuries.

The southern end of the cottage was added along with commercial bread ovens which were housed in a lean-to extension at the back of the cottage – all that remains of the bread ovens today are a couple of brick arches that can be seen on an outside wall between the cottage and the National Trust shop.

It is likely (although we do not know) that Bridge Cottage was a tied cottage and its occupants probably worked for the Constables in the mill and on the land. Family members might have made a small income from collecting tolls from the lighters passing through Flatford Lock and providing food and drink for the men on the passing barges along the River Stour between Sudbury and Mistley Wharf. The families living in Bridge Cottage cooked their own meals on a large central fireplace which can still be seen inside Bridge Cottage today.

In the 19th century, Bridge Cottage was converted into two dwellings to accommodate two families (see image above). Each family lived in a small parlour with access to a bedroom in the attic. One family accessed the attic by a small twisting staircase whilst the other used a loft ladder.

1970 Sidney Edward Dale bought Bridge Cottage, the tea garden and the land beside the Stour down to and including the Granary from Thomas Rushworth Horrocks.

1981 Sidney Dale died but the tea garden continued to be run by Sidney’s business partner Joan Dale whilst souvenirs were sold in Bridge Cottage itself.

Linda Lemoine (Sidney Dale’s daughter) inherited Bridge Cottage on her father’s death but only received shares resulting from its sale many years later.

1985 - Digging the foundations for the National Trust Tea Room

In 1985 the National Trust finally bought Bridge Cottage. It had been advertised for sale on the open market several times but fortunately this was not picked up by an inappropriate business like a fast food outlet!

It was clear from the outset that the area outside Bridge Cottage was far too small for the growing numbers of people visiting Flatford and expecting tea!

Funding for the new Tea Room (which is still in everyday use) was provided by the Countryside Commission and various bequests. Digging the foundations caused the the remains of the Dry Dock to be uncovered. The Dry Dock (adjacent to the new tea room) was in a very poor state, an old barge had been dumped there and it had been completely covered over by silt over which thick grass had grown.

The Dry Dock was later restored by the National Trust and the River Stour Trust.

Cottage, now National Trust information centre and shop. Probably late C16 with later alterations. Timber -framed, rendered. Red brick stack. Thatched roof. One storey and attic. 3 ½ -bay frame with lower addition to right. To left a board door and bow window. Central fire window. Further board door and casement to right. Gabled half dormer to right with casement window forms a post C18 addition. Central stack. Lower extension to right under hipped roof. Rear: board door and 2-light window with horizontal glazing bars and further board door to right with 2- light casement adjoining. 2 gabled half dormers with casement windows. Interior: chamfered spine beam and cross beams with run -out stops. Jowled posts, wall plates with some arch braces and wall studding exposed. Collar rafter roof, clasped purlins to part. II* grading reflects the importance of the cottage as part of the Flatford Mill group and its significance in the work of John Constable. Undergoing restoration at time of resurvey. 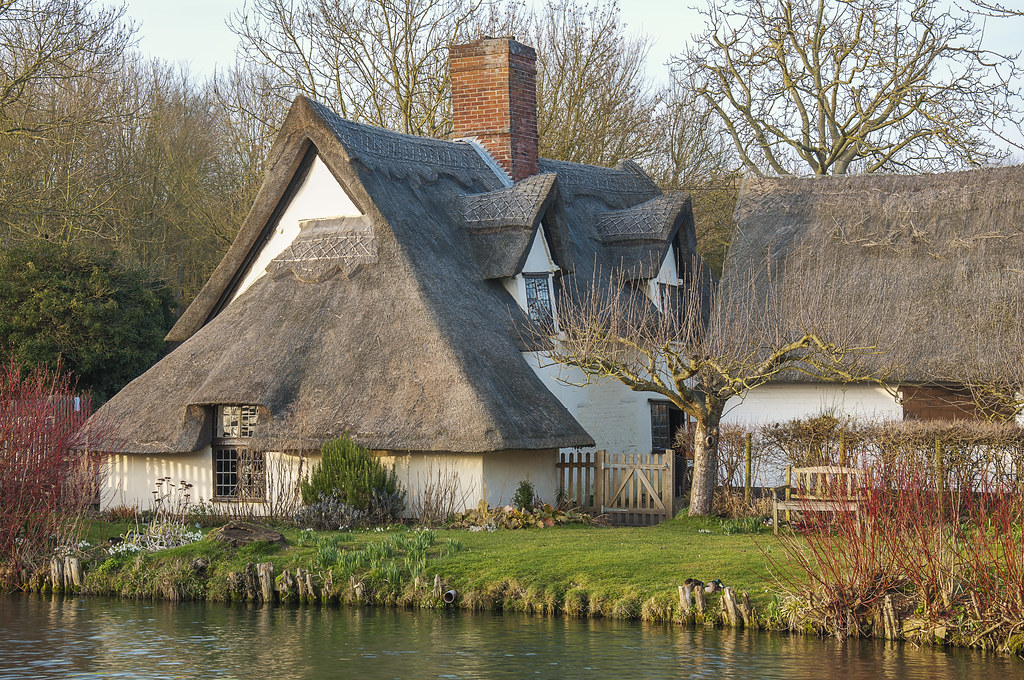 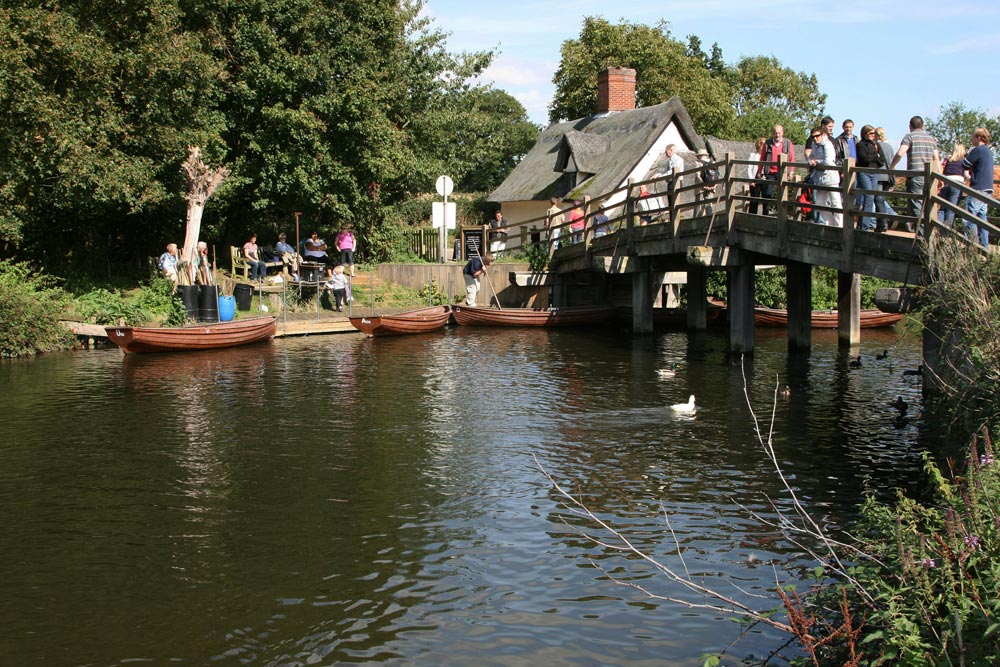 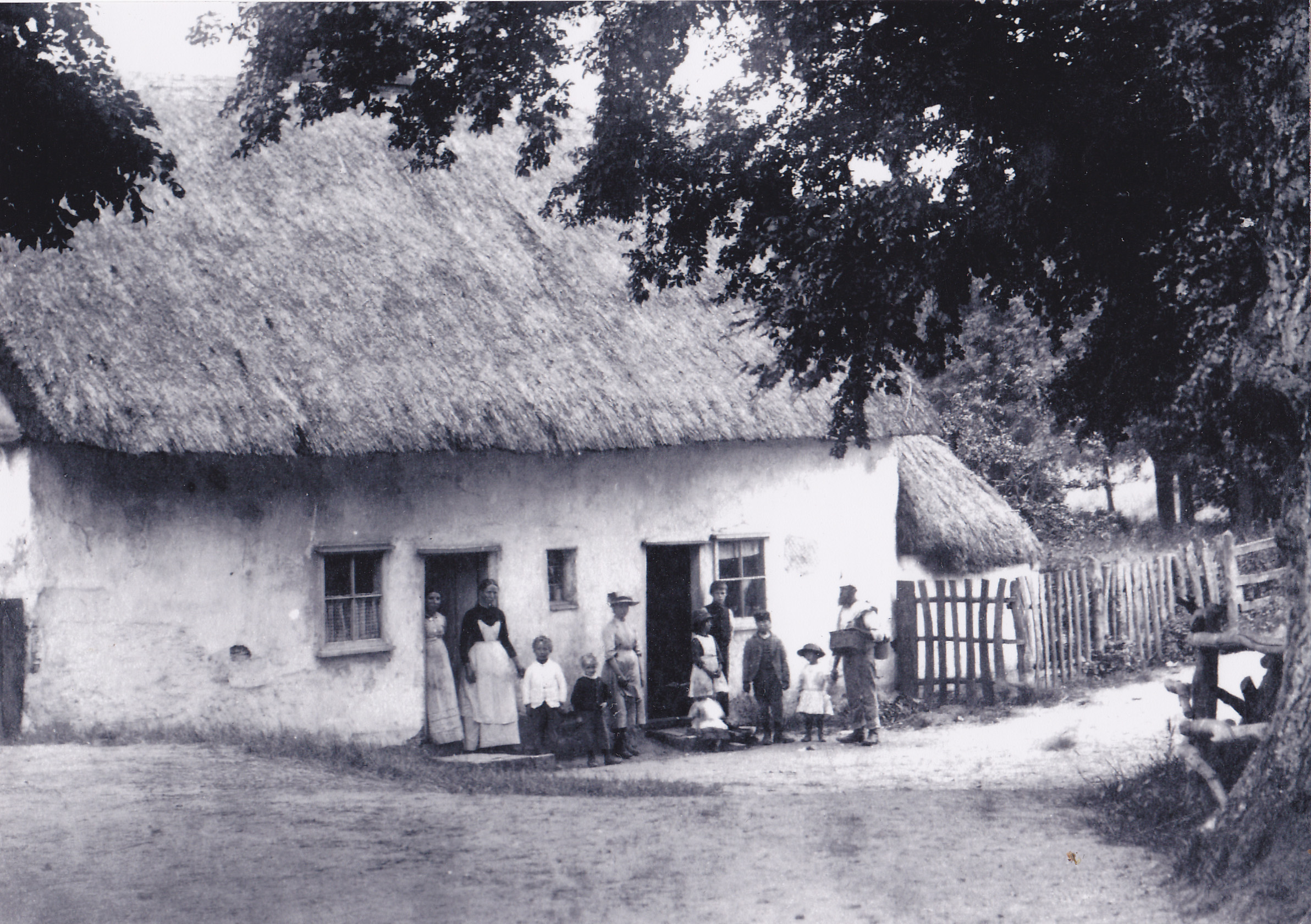 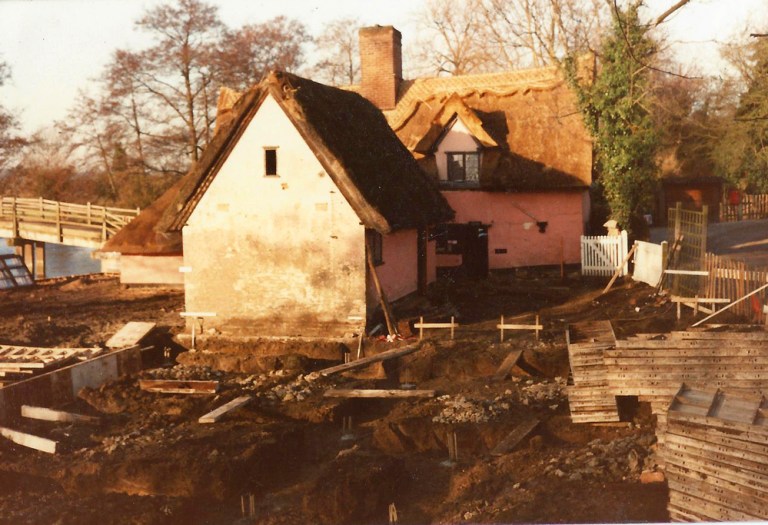 1985 Digging the foundations for the National Trust Tea Room 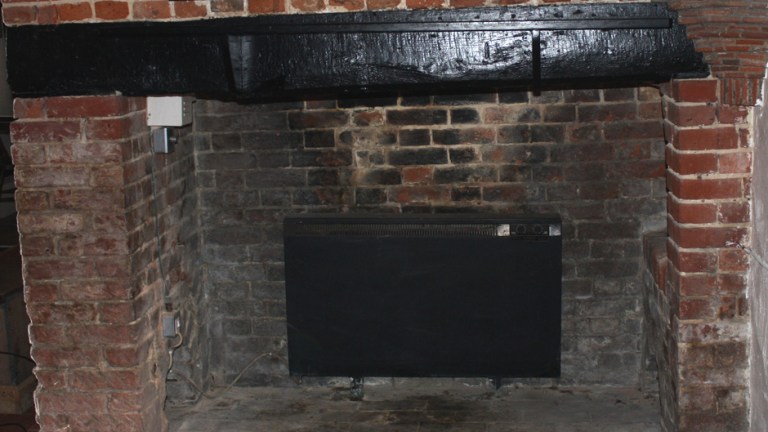 Fireplace from one of the cottages 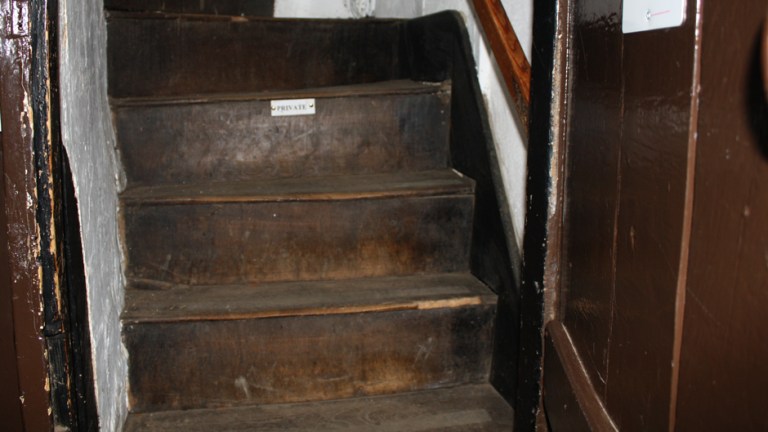 Steep stairs to the upper floor 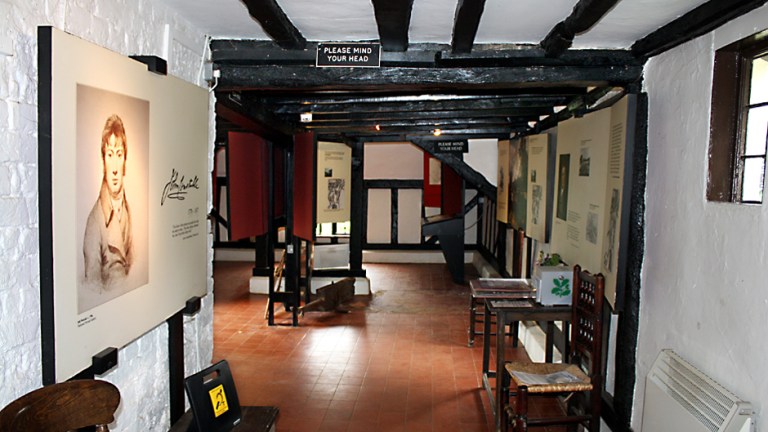