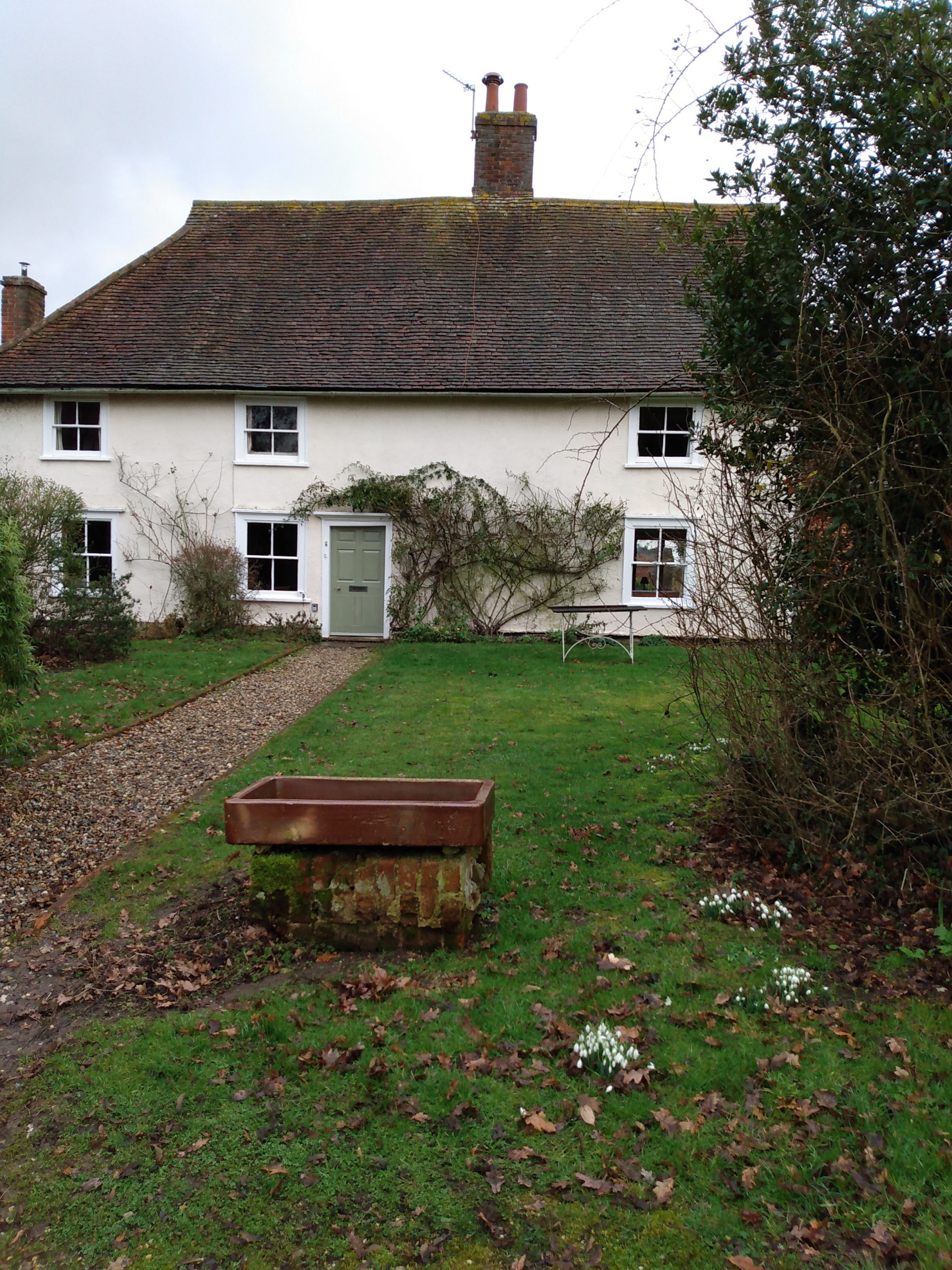 A farmhouse, formerly a hall house of the C15 or C16, converted into a lobby-entrance house in the C17 with minor C19 and C20 alterations.

Elm Farmhouse, Straight Road, East Bergholt, a farmhouse of the C15 or C16, is designated at Grade II for the following principal reasons:* Architectural interest: This former hall house of the C15 or C16, retains a significant proportion of its original fabric, including the principal timbers of the wall and cross frames, much of the studwork, and a crown post roof with smoke-blackened timbers. The timber frame is of high quality materials and craftsmanship, well-executed in its construction. * Interior: Both the plan-form of the hall house and the evolved lobby-entrance arrangement are clearly legible, demonstrating the development of domestic building plans from the late-medieval into the early-modern periods. * Alteration: Although there has been some C20 remodelling, this has resulted in very little loss to the historic fabric and has not affected the special architectural interest of the house unduly.

Elm Farm is located at the edge of former heathland to the east of the village of East Bergholt, the birthplace of John Constable. The farmhouse originated as a hall house in the C15 or C16. It is uncertain what it was called at that time, but a parish map of 1697 refers to the building as ‘Bucks’ which had, to the front, a large elm tree, a local landmark said to be referred to by Constable in one of his letters. By the time of the first edition Ordnance Survey map of 1882, the farmhouse had a number of associated outbuildings including a barn to the north-west; shelter sheds and a cattle yard to the north-east; a dairy attached to the rear of the farmhouse and a large maltings to the south-west of the house. A C19 photograph shows the north elevation of the brick-built maltings, with a hipped tiled roof, to the front of the farmhouse. The steading was known as Maltings Farm in the early 1900s when the farm was bought by the Eley estate, although the maltings was probably demolished by this time. The farm remained tenanted until the 1950s, but the farmhouse was in a poor condition until the current owner bought the house from the estate in 1973. The architect Ronald Geary, who worked with Raymond Erith, was commissioned to restore the house sympathetically, converting the dairy, two C19 outshots to the north elevation and one to the south into additional rooms, linking them with a corridor to the rear of the historic building. Some minor interior remodelling to the first floor accommodation of the farmhouse occurred at this time. The upper storeys and much of the roof structure of the dairy were reconstructed in the C20; its rear elevation has a roofline scar in the render suggesting that the roof was raised or another building was attached to it historically. In 1987, some of the outbuildings to the north-east were demolished, but the barn remains.

Former hall house erected in the C15 or C16, converted to a lobby-entrance house in the C17.

Materials: The farmhouse has a rendered timber frame except for the south-east gable wall which is rebuilt with brick and clad with weatherboard. The rear corridor and attached former dairy are of rendered brick and the roof has a tile covering.

Plan: The three-bay, medieval hall house plan remains legible with the service end to the north-west and the high end to the south-east both having a chamber at first floor. The current entrance hall marks the position of the cross passage.The hall was ceiled over and a stack was inserted into the cross passage in the C17, creating a lobby entrance house.

Exterior: The farmhouse has two storeys, topped by a roof, which is gabled to the south-east and half-hipped to the north-west, and which has a substantial, off-centre, brick stack. The façade has a six-panelled entrance door with a slight hood and a pair of C19, two-paned sash windows at the ground and first floors. To the rear, the first-floor sash windows are C19 in date, but those lighting the corridor and the refurbished dairy are C20 casements. The dairy is one storey with an attic and has a gabled roof with tile covering and dormers.

Interior: The substantial, pegged and jointed timber wall and cross frames of the hall house, and C17 floor frames are apparent. The ground floor has a wide central hall approximately in the position of the cross passage, broken through at the rear to allow access to Geary’s corridor; the midrail of the rear wall frame forms a lintel to the opening. The inglenook fireplace is partly enclosed, with a mantelpiece above and flanking C19 cupboards. The cross frames on either side of the hall are part of the original hall house and continue through the first floor to the crown-post roof above. The two, axial bridging beams are chamfered and stopped and the joists have mortice and tenon joints. The room to the south-east, the former parlour, is accessed through a late-C18 or early-C19, two-panel door. This room was gentrified in the early C19 and has a simple fireplace and a recessed Suffolk cupboard of that date. Late-C20 French windows open onto the rear garden. The rebuilt south-east gable wall has been opened to allow access to the incorporated outshot which now serves as a study. The room to the left of the entrance hall is also accessed through a late-C18 or an early-C19 two-panel door; this was the service end where the pantry and buttery would have been located. The rear wall frame and original north-east external cross frame retains wall posts, midrails, some studs and some wattle and daub panels. The converted outshots to the north have C20 fixtures and fittings. To the south-east, the dairy has been converted into a kitchen and retains some timber framing on the rear elevation. A C20 back stair leads to the upper floor.

The main C20 stairs lead from the entrance hall to the first floor where three, slightly cambered tie beams are present. The principal bedroom at the south-east end, formerly the solar, has been subdivided to enable an additional bathroom to be installed. On the front wall frame, a jowled wall post is strapped to the tie beam and the wall plate. The wall plate of the rear wall frame is exposed in the bathroom. An C18, two-panelled door with HL hinges leads from the bedroom to the upper landing where wide, C17 floor boards, the stack and the cross frame shared with the entrance hall are apparent. From the landing there is access to a smaller front bedroom and to a corridor leading to a bathroom and the former chamber over the service end. Wall and cross framing is exposed to the front, north-west end and rear.

Access to the attic rooms of the dairy is from the bathroom next to the principal bedroom; all of the fixtures and fittings are C20 in date. Although it is clear that some of elements of the clasped purlin roof of the dairy have been retained, much was replaced in the C20. Above the historic hall house, the original crown post truss remains largely intact, although it has been remodelled at the south-east gable end. The crown posts are plain in section, with slender bracing and simple stop chamfers and there is some evidence of blackened timbers. Some of the common rafters have been replaced and side purlins have been introduced at a later date.