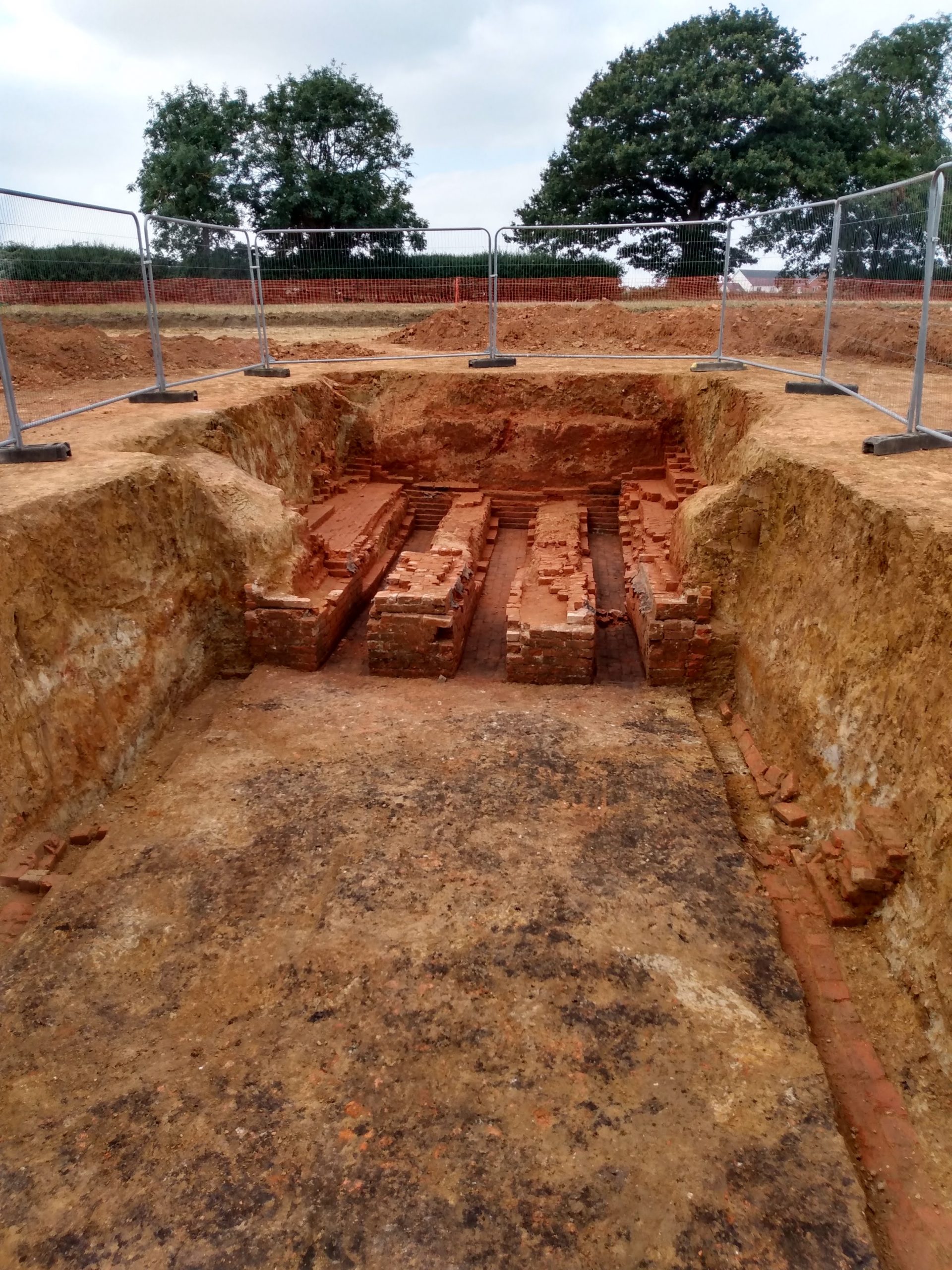 {"type":"FeatureCollection","features":[{"type":"Feature","properties":{"post_type":"local-story","postid":3463,"title":"1800's Brick Kiln","excerpt":"The remains of an 1800's Brick Kiln have been unearthed in a field next to the Medical Centre in Heath Rd. This kiln, typical of its type for Suffolk, would have been close to the Constable family Windmill on the corner of Mill Road and would typically have used locally sourced clay from \"Clay Pit Field\" next door north east of the Donkey Track. The red bricks from this kiln would doubtless have found their way into numerous houses in the village built during that period.Finding such a site in good condition is unusual, although a few other examples have been found in this part of Suffolk. It is unfortunate that, within a week of the find being made public, the developers filled in the site completely. Sadly therefore, except for the photos, we have lost this little bit of Victorian industrial history almost as soon as we found it.\u00a0(Download this article as a PDF here)","highlight":"yes","index":63},"geometry":{"type":"Point","coordinates":[1.028361,51.975391]}}]}

The remains of an 1800's Brick Kiln have been unearthed in a field next to the Medical Centre in Heath Rd. This kiln, typical of its type for Suffolk, would have been close to the Constable family Windmill on the corner of Mill Road and would typically have used locally sourced clay from "Clay Pit Field" next door north east of the Donkey Track. The red bricks from this kiln would doubtless have found their way into numerous houses in the village built during that period.

Finding such a site in good condition is unusual, although a few other examples have been found in this part of Suffolk. It is unfortunate that, within a week of the find being made public, the developers filled in the site completely. Sadly therefore, except for the photos, we have lost this little bit of Victorian industrial history almost as soon as we found it.

An 1800's Brick Kiln was unearthed by the archaeological excavation of the two fields next to the Medical Centre off Heath Road, East Bergholt. The excavation was begun in early September 2021 by Colchester Archaeological Trust as a precursor to planned development of 76 new homes on this site by the Hills Building Group.

There's a lot of clay in Suffolk and local brick kilns must have been quite common across the county. We can imagine hundreds of such kilns working with locally sourced clay, creating bricks with slightly different dimensions fuelling the housing booms of the Victorian and Edwardian periods.

Most of these kilns are long gone and covered up and so to find this one is relatively rare. There have been other finds nearby, notably in Layham, outside Hadleigh, Trimley St Martin, just north of the River Orwell, and at South Cove near Southwold, the latter being reopened for the public to see in 1977.

It's possible to guess at the location of the sites of brick kilns from the names of the surrounding fields . Fields with names like "brick", "kiln" "clay", "pit" etc are all likely candidates, and in East Bergholt, using the old "Tithe" maps (which list fields by name and owner), we can identify three areas where brick kilns would have been likely to be sited:

For the site in Heath Road there is a similar name reference to be found in the Brasier Map of 1731. This is a field called "Clay Pit Field" which is just south west of the Donkey Track and adjacent to the site. This provides some evidence that brickmaking was going on here in the mid 1700's, well before the 1800's. In those days this area of the village was primarily heath land, generally of poor quality and thus ideal for use for kiln work, a good place to carry out work that would have produced unpleasant smells and refuse. Today this field has a significant pond at one end which may have been dug out as a source of the clay used for brick making.

The existence of a brick kiln in the village has long been forgotten together with any related field names, but supporting evidence of the site was spotted by one keen local historian (Adrian James) in this advert for an auction of 100,000 red and white bricks from a local newspaper of 1862:

John Jones (Suffolk Industrial Archaeological Society) has observed some interesting points in this advertisement. Firstly, having so many bricks for sale at the same time, and by auction, suggests that the proprietor was either retiring or had failed in his business. Secondly, the advert offers both red and white bricks for sale from the same site. This is an unusual situation because Suffolk clays were mostly used to make red bricks, (notable exceptions being in the Woolpit area, where high quality whites were made, and at Fison's brickworks in Stowmarket, where both types were made as well as white malt kiln tiles). Until this now there's been no evidence that anywhere else in Suffolk could make both types, but of course the existence of this advert doesn't make it certain that the bricks for sale were actually made on site - it may  have been that the whites were imported and simply being offered for resale. Isn't archaeology frustrating - you suspect but you can never know for sure!

How did Suffolk Brick Kilns work?

All the discovered East Anglian brick kilns appear to follow a similar construction, as illustrated in this image opposite. The kiln was dug deep into the earth, typically about 2m, and the kiln laid out in two parts; the kiln firepits where the coal was burned and the bricks fired, and a coal base, of equal length, where coal was initially fired then pushed deep into the fire pits using a 'hoe' as a coal-pusher and or fire rake as an ash-remover. The coal base typically would typically slope slightly towards the fire pits making pushing the lighted coal easier.

Newly cast clay bricks would be laid in layers on a 10 x 10 "netting" to form a series of "chimneys" through which hot gasses would pass, thus heating and firing the bricks. The bricks lower down would be fired the most and therefore the hardest and used where maximum strength was required. Bricks in the higher parts of the stack would be softer and typically used for general building. The end of the stack, (termed the "wicket") would be sealed with a sand filling to keep the heat in, and the top of the kiln would have wooden planks to act as a draught control during the "setting" and "drawing" of the kiln.

The openings to the firepits were covered with cast iron fire doors. Ground water often had to be extracted from the base of the kiln and different ground water drainage systems were typical.

How old is the Heath Rd Brick Kiln?

The fact that there's no evidence of fire doors or their hinges in this site, and that there was no evidence of a ground water drainage system indicates that the structure may be of a more primitive design than the kilns at Trimley and Layham. That and the 1731 Brasier map reference to the "Clay Pit Field" raises the possibility that the Heath Rd Brick Kiln existed from a time earlier than the mid-1800, possibly going back to the early 1700's - after all the village certainly had bricks in those days and they were most likely fired somewhere central to the village. Had the site not been been so prematurely filled in it might have been possible to examine the bricks in situ to try and establish the validity of that idea.  Sadly that level of investigation is not now possible.

As with other topics on this website, the East Bergholt Society welcomes your comments and questions, and where relevant will redirect specific technical and historical queries to the subject experts noted in the credits below.

This article was based on input from 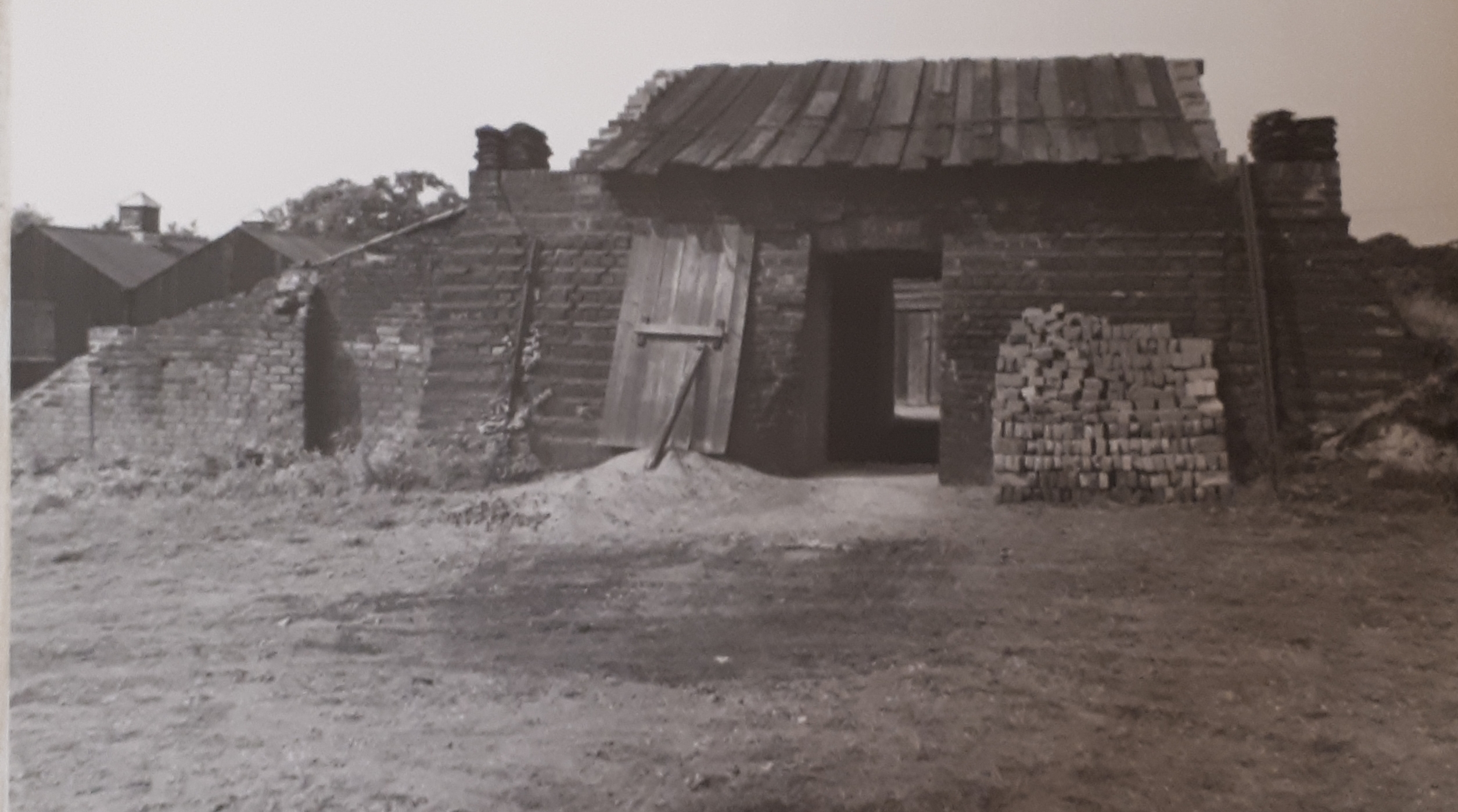 What the surface buildings of a typical Suffolk brick kiln would have looked like. This building was re-opened in 1977 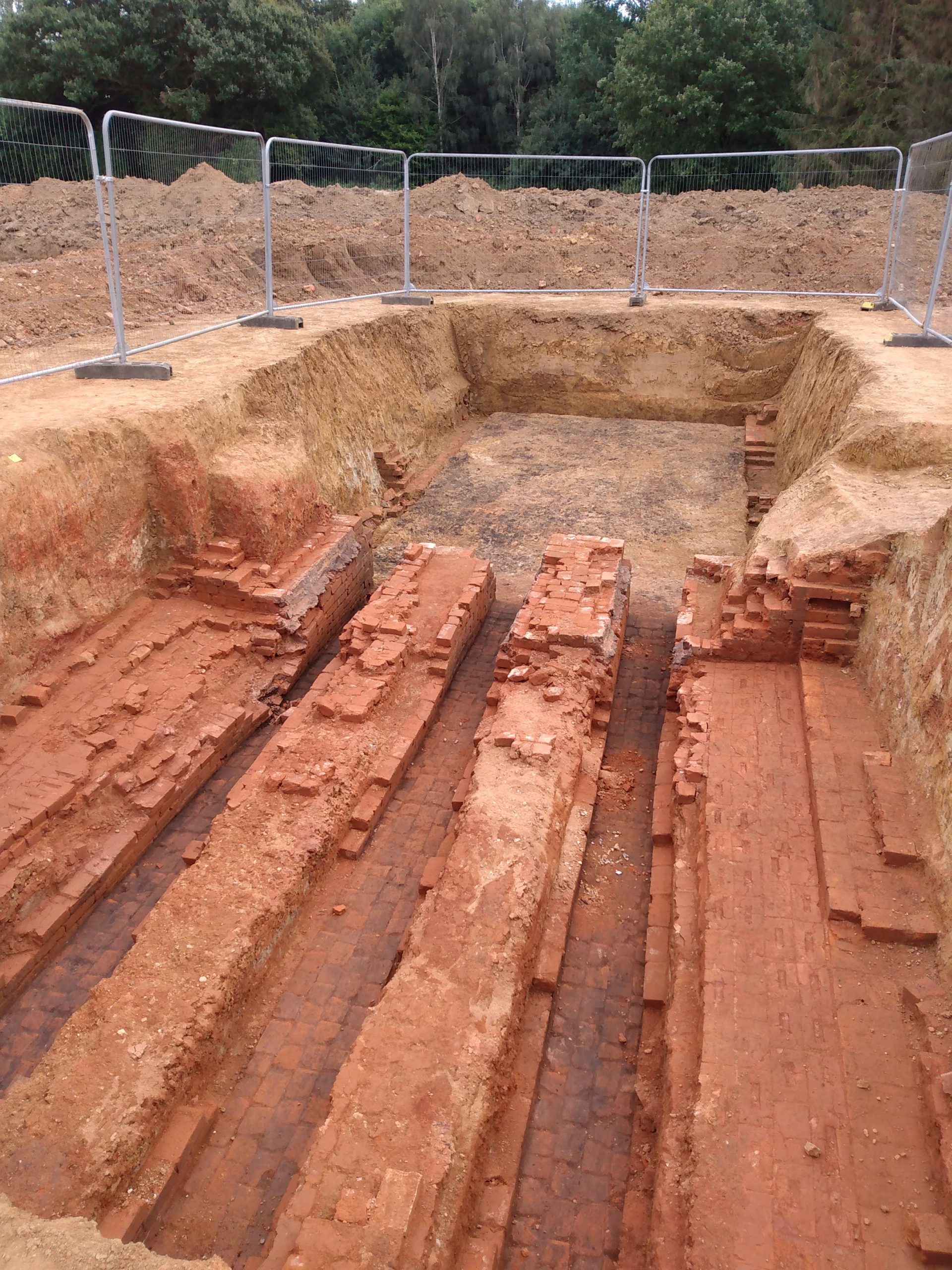 Showing the rows of fire pits into which lighted coal would have been pushed to fire stacks of clay bricks stacked in layers above them. The slightly sloping base where the coals were lit before being pushed in is shown at the rear. 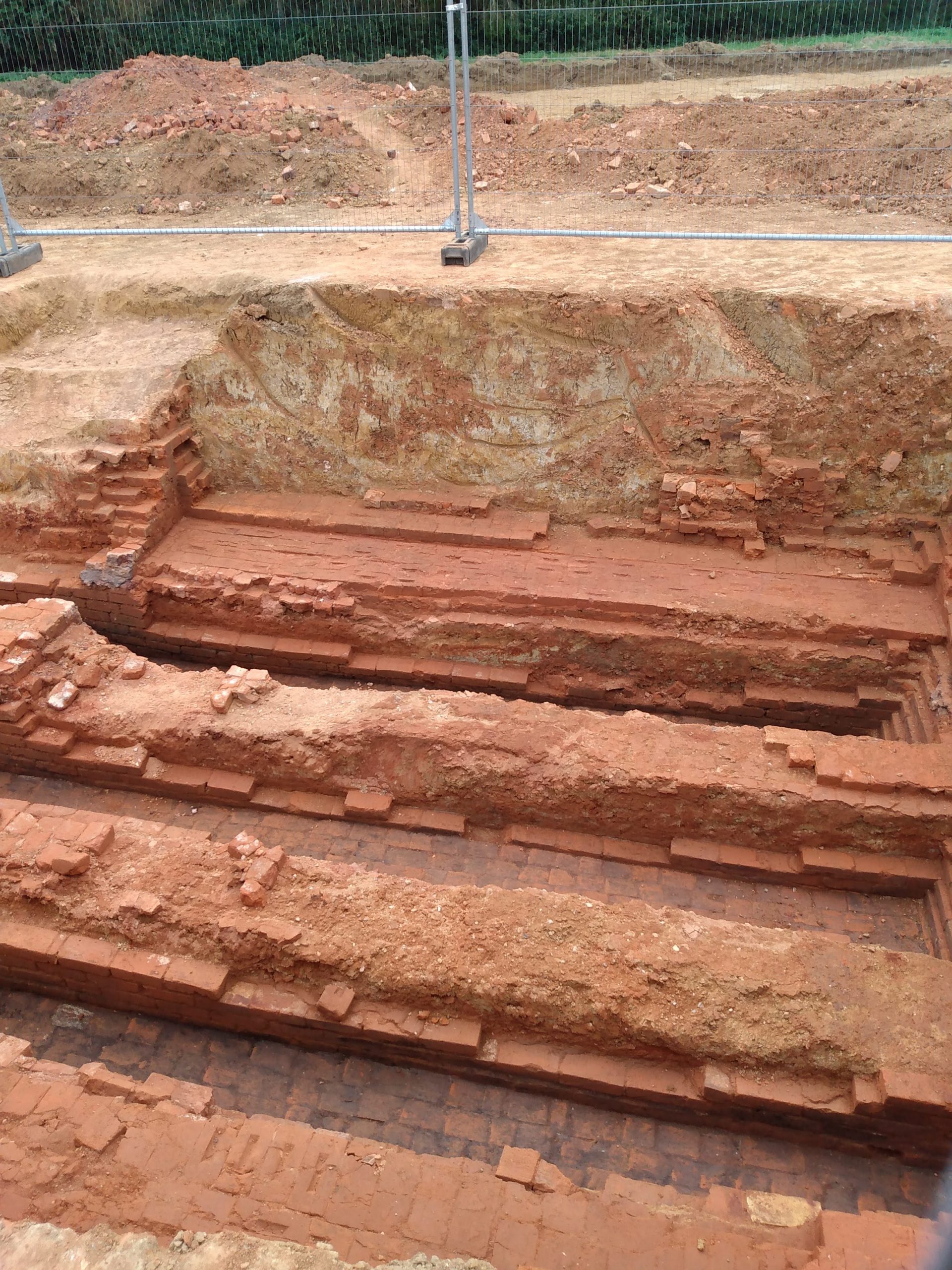 A sideways view of the fire pits 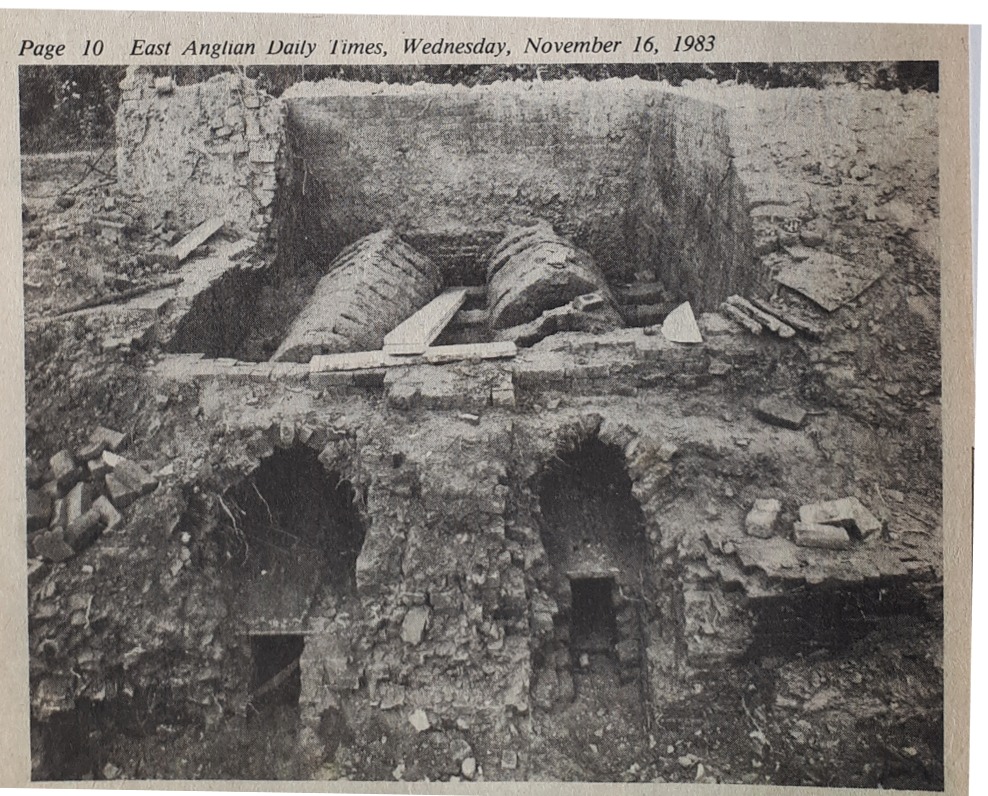 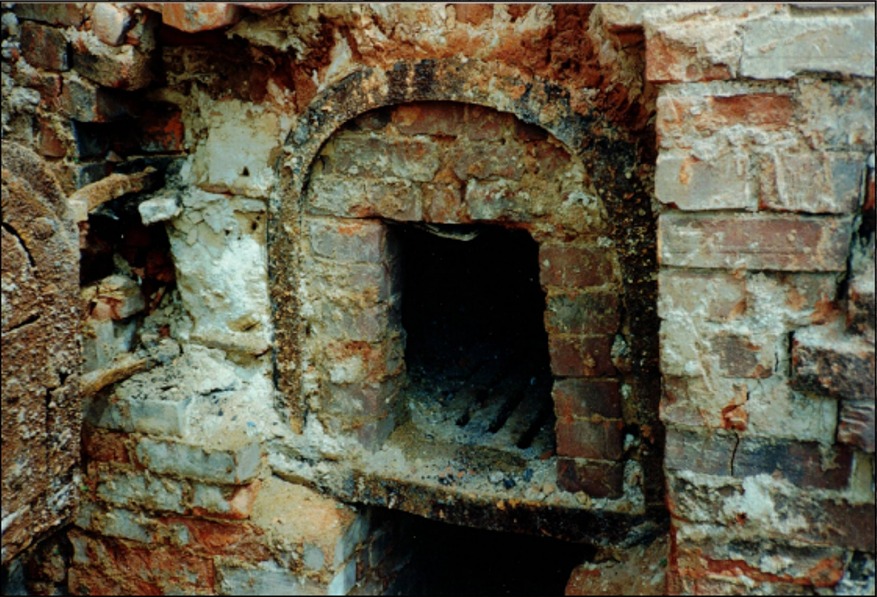 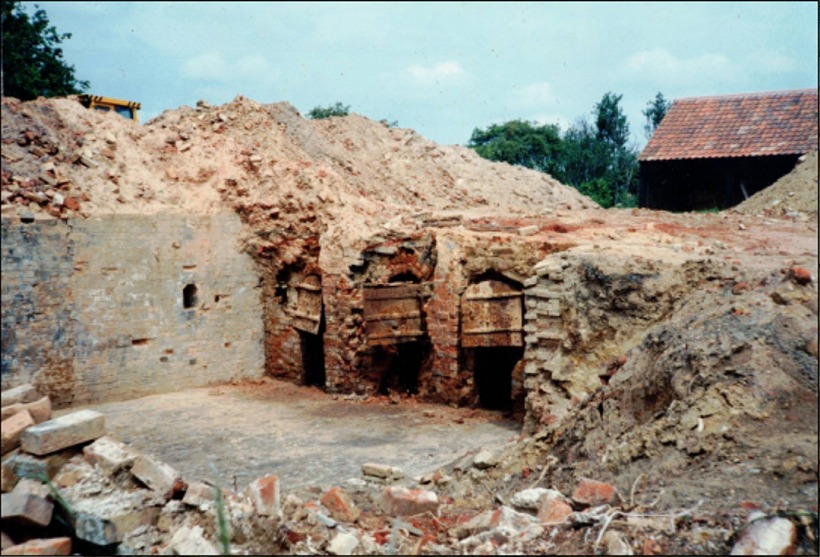 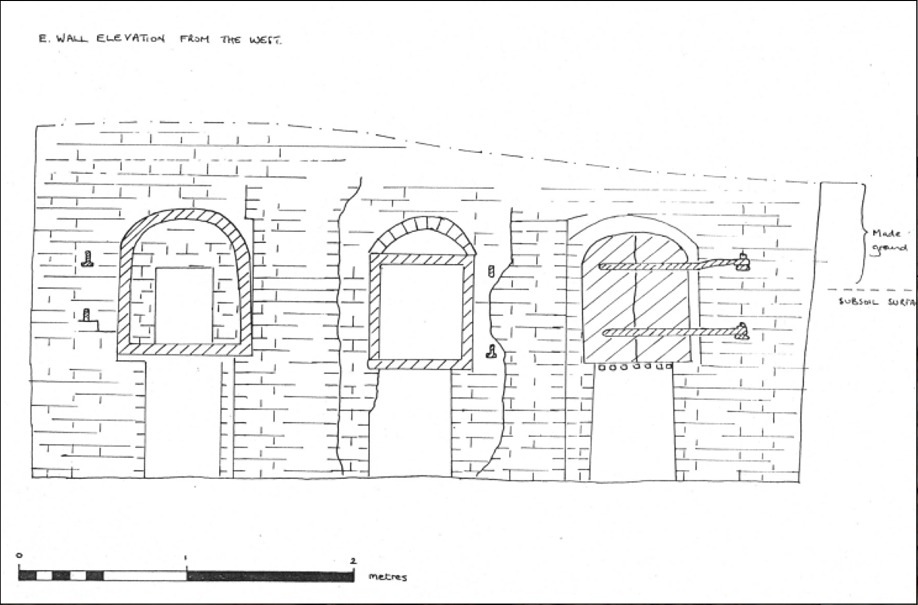 This drawing of the excavated Layham kiln shows a typical Suffolk Brick Kiln fire pit doors, with one cast iron firedoor in place.