You are here: Home > Flatford Lock

The first lock at Flatford was installed in the early eighteenth century.  It was turf sided and located about 20 yards to the north of the present lock.

The River Stour was made a navigable river by Act of Parliament in 1705 which resulted in thirteen* locks being installed along its length. These locks enabled horse-drawn barges (called lighters) to negotiate the differences in river levels and travel relatively easily between Sudbury and Mistley Wharf. On reaching Mistley Wharf, their loads were transferred onto sea barges (called Thames Barges) which sailed round the coast to London. *The number of locks was increased to fifteen with the opening of Wormingford Cut in 1838.

Stour lighters were usually linked together in pairs and pulled by a single horse – and so the locks were designed so they could accommodate two lighters at a time. Each lighter could carry up 13 tons and by pairing up, the tonnage  was increased to 26 tons per journey, far exceeding the weight that could be transported by horse and cart. On their outward-bound journeys the lighters carried a variety of goods including Suffolk flour and bricks bound for London and on their return journeys, they carried Newcastle coal to power the Sudbury brick factories and London sewage to spread on the Stour Valley fields.

The installation of Flatford Lock, along with other locks along the River Stour, increased local prosperity, especially that of John Constable’s father Golding Constable, a Suffolk entrepreneur who by 1800 owned two corn mills, a windmill,  two Thames barges and who made full use of the Stour Navigation’s lighters to transport his goods to Mistley Wharf where they were unloaded and loaded onto his Thames barges and then sailed to London.

By the time John Dunthorne painted Flatford Lock in 1814 the lock was in need of rebuilding as nine lintels (or galley beams) had already been installed to stop the lock gates and the sides of the lock falling inwards.

This painting by John Dunthorne is owned by Ipswich and Colchester Museum Service.

Although John Constable was painting at the same time as John Dunthorne he often chose to omit the lintels because they interfered with his sight-lines! Because Flatford Lock is now made of concrete, the wooden lintels are not now structurally necessary. They are retained because of the importance of Constable and the effect his life and art continues to exert in the area. 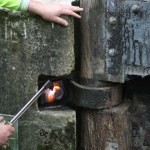 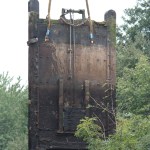 2014 Old gate manouvred out of the lock 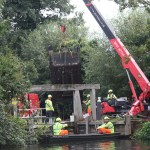 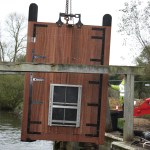 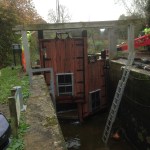 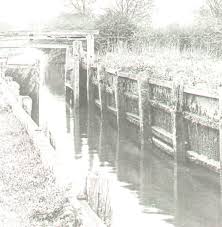 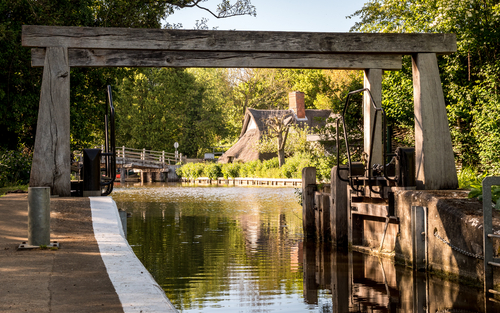