You are here: Home > The Heath 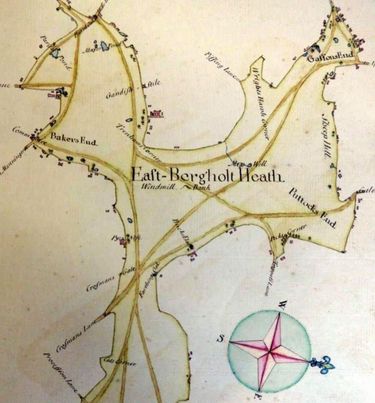 Throughout the medieval (and postmedieval periods) the central part of the parish was dominated by an extensive area of open heathland (East Bergholt Heath), criss-crossed by trackways leading to Dodnash Priory, Brantham, Flatford and Wenham.

Although the core of the village was grouped around the church and the principal manor house (Old Hall) within the western part of the parish ribbon settlement stretched alongside the fringes of the Heath, particularly on the western and southern edges, covering c.342acres (c.140ha).

The several ‘End’ place-name elements within the parish such as Gaston End, Bakers End, East End, Gallows End, Pitts End and Puttocks End derive from the growing population pressure of the medieval period, which saw previously uncultivated common and waste land on the margins of manors and estates taken into cultivation for the first time, often farmed from individual small farmsteads or clusters of farmsteads around a common green (Ends) beyond the main centres of settlement.

East End was the site of at least two small manorial sites from at least the end of the 12th century, and Gaston End was named in a document of 1437.  The manorial site of Commandree was at Bakers End.  Another small settlement area, Burnt Oak, is medieval in origin, named as ‘Brendhok’ in a document dated 1384-5.

Brasier’s map of East Bergholt Heath (1731) shows the heath criss-crossed by tracks, with ribbon development of settlement along parts of its perimeter.  ’Windmill Bank’ is ringed.  The road to East Bergholt village from Burnt Oak can be seen to the south west, and Gastons End is to the north west.

East Bergholt Heath was enclosed in 1817, and the opportunity was taken by the principal landowners to rationalise their land holdings and create the system of straight roads which are familiar today.