You are here: Home > The River Stour 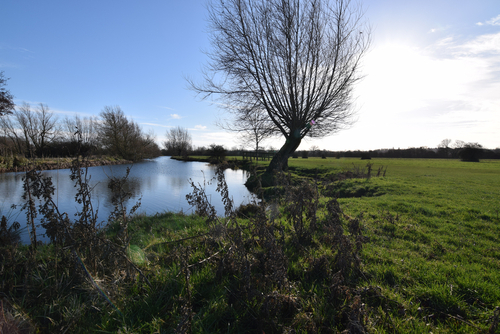 In the days before road, a Sudbury Act of Parliament passed in 1705 giving the town authority to create a ‘navigation’ and bring barges up to 45ft long to Ballingdon, so the Corporation built locks downstream to Flatford, the lowest point for fording the river regardless of the tide, and the trade in bulky commodities such as bricks and grain begun.

The 25 mile stretch to make the river workable included the construction of 13 pound and flash locks (these were locks of primitive design, lacking balance beams, and were opened and closed by pulling chains), the widening of the river in places and construction projects such as the dry dock at Flatford.

This route was a great success. The price of coal was greatly reduced however there were always disputes between land owners, mill owners and barge (lighter) handlers, so in 1780 another Act was passed and a new Commissioners appointed with included Golding Constable (John Constables father)

This act also gave right to provide a continuous towpath which was something that was never carried out, maybe due to cost, but the lacking of a continuous towpath became one of the main reasons the river was not as viable as other similar projects around the same period.

That said, for a time large amount of goods were carried this way, transported in lighters (barges)of approx 13 tons each. One horse pulled two lighters, crewed by a Captain and a Boy and took on average two days each way (Sudbury to Mistley and back) Cargoes varied but included straw, food, coal and bricks. Bricks were transported from Sudbury brick yards and used in London on various projects including the Royal Albert Hall and South Kensington Museums. (Once the goods reached Mistley Quay they were transferred to sailing barges and taken by sea, mainly to London.

The general area of Dedham Vale was made famous by John Constable whose father owned mills at Flatford and Dedham and a number of lighters, so John had a good understanding of the ways of the river from a very early age.  His most famous painting “The Haywain” was painted in 1821 and “The Leaping Horse” in 1825.  He spent his early life living in East Bergholt and going to school in Dedham where he walked over Fen Bridge.

The arrival of the railway at Marks Tey in 1849 saw the slow decline of the river and in 1890 the Proprietors found themselves in debt for the first time. It’s believed that the last barge went through Boxted Lock in 1918. Had this decline been allowed to continue the river would have become at the most no more than a stream today.

In 1968 the River Stour Trust was formed and continues to run to this day.  The Trust is run by about 80 volunteers who operate the boat trips to raise money to build the jetties and restore locks etc.  Flatford Lock  - probably the most famous Lock in the world -  was restored in 2016. Stratford Lock was reopened in 2018 and there is the hope to reopen  Dedham Lock in 2020.

Points of interest along the way:

·         The boatyard at Flatford was constructed to allow water in to float the repaired lighters or newly constructed lighters on to the main river.  Once this was achieved the entrance was boarded up and the clever bit took place. A plug was removed from the bottom and water went down a pipe that was laid under the river and discharged in the fields opposite, which is at a lower level.

·         Fen Bridge, whilst not being the original, is in the same location as the one Constable would have used when he went to school at Dedham from his home in East Bergholt.

·         During the First World War the Admiralty ordered all lighters on the river to be sunk in case of invasion.

·         Look as hard as you can but you won’t see any electrical pylons on this stretch as all are buried due to it being an Area of Outstanding Natural Beauty.

·         As there was not a continuous towpath on one side of the river, horses had to cross at least 30 times depending on which side agreement with land owners had been reached.  They used the bridges and slips where possible but on other occasions they had to jump on the front of the lighter and be transported across to the other side. Unfortunately some slipped and drowned.  The horses also had to jump over a hundred stiles and low fences – made famous by Constable’s “Leaping Horse” painting.

With thanks to Alan & Marion @The River Stour Trust, for more information please see HERE